Posted on February 9, 2021 by akadventurer
A couple hours project from last weekend.

What I’ve been using a few years(not that I’ve carried it much for a bit over a year, using metal card cases instead);

That blue thread is my favorite braided 20# ice fishing line. Great to sew with, strong, blends in on most things, but a nice(I think) contrast on others.

Don’t use cash much anymore with Covid, but I fold a few bills inside this one, its just a touch too thick to have them on the outside. Makes cash access a little slower, but as I say I don’t really use it now anyway.

So far its working out verry nicely!

Posted on February 4, 2018 by akadventurer

Finally remembered to fix the Leatherman sheath that I carried my Vic Spirit in. The Nylon one was working so well, I’d forgotten about it.

Oil tanned leather strap scrap, and a few rivets. Was going to just restitch the top of the loop shorter, but the lower stitches didn’t look too swift. And no way I could stitch the bottom(OK, it IS possible, but I don’t have the patience or dexterity to do it).  Decided screw it, new loop piece, clear the stich holes with longer length and rivet it, a lot easier! 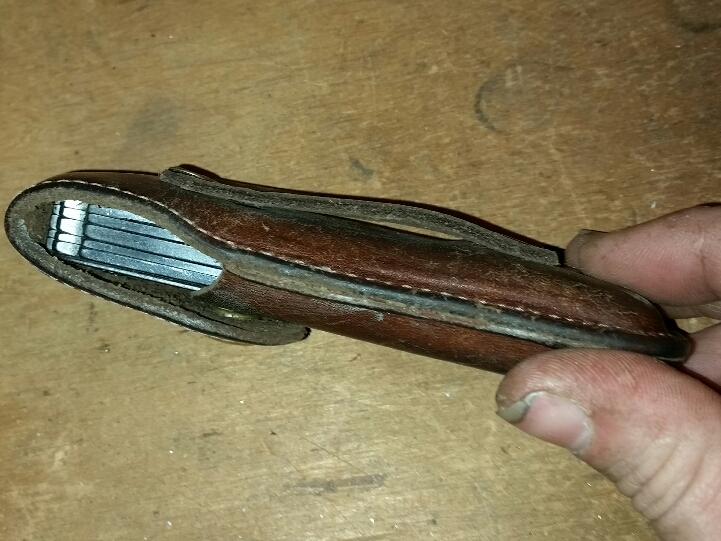 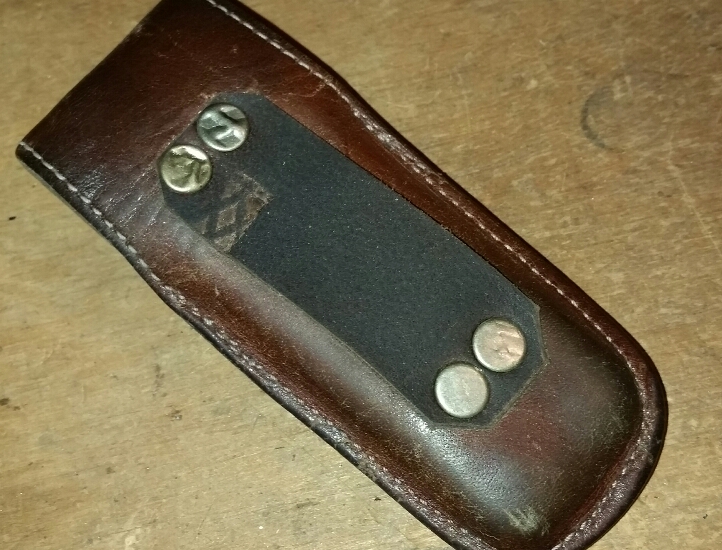 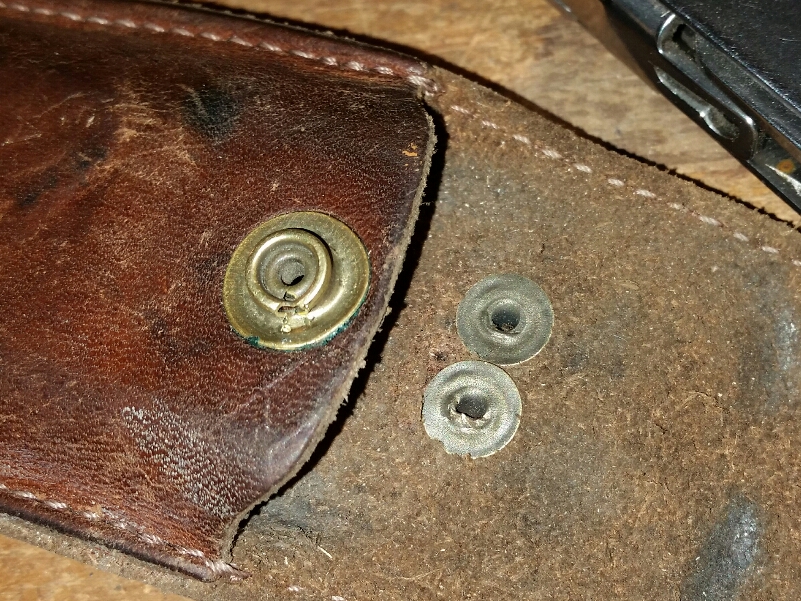 Light imprint on the loop where I over did the vice (too hard to get these rivets to seat without off setting/bending over with the hammer and punch made for them, so I always just vice press them). It doesn’t show, and I wouldn’t care if it did…

Forgot about the front snap  (whoops! )when I did them, crimped one spot on its edge. Still works fine… if it messes up latet4, I can replace it no big deal.

In other news, the belt loop on the sheath I use for my Victorinox Spirit gave up the ghost about 1.5 weeks ago. 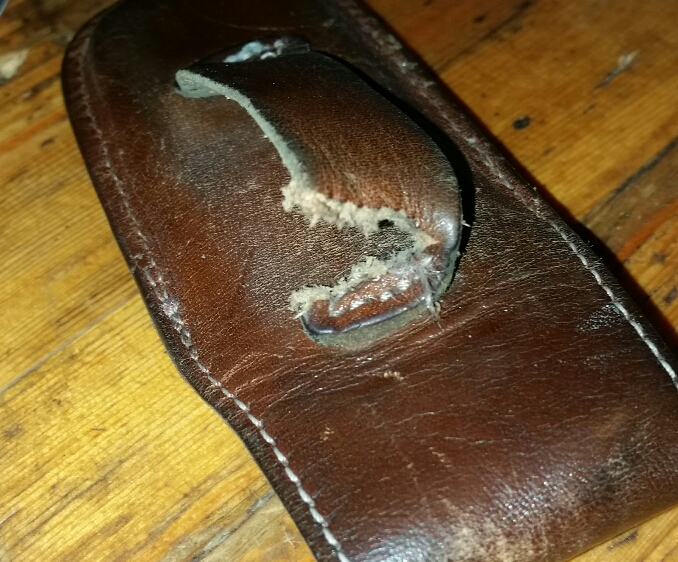 Thankfully not completely! It was started at one corner when I left yesterday morning, figured it’d be fine a day or two, since it’s been rough and loose at the stitches, and stretched but not torn for weeks (months probably ). Also Thankfully I didn’t lose it! Never ceases to amaze me, I dont deserve it but God continues to be very good to me!And yes, that’s not a Vic sheath. It’s Leatherman! Made for the original Wave.(for those that don’t know, there have been two Wave models, the first slightly more compact model around 2000ish, the second bigger, and current one from around 2004.)I never liked the Victorianox sheaths, leather but thick and clunky, and worst of all, velcro closure. Was looking for a sheath for my New Wave at the time I got this, turned out to not fit it. But after a couple months when I lost the Wave, and got the Vic, it got put to use. The Spirit always fit this sheath better than it did the one made for it! 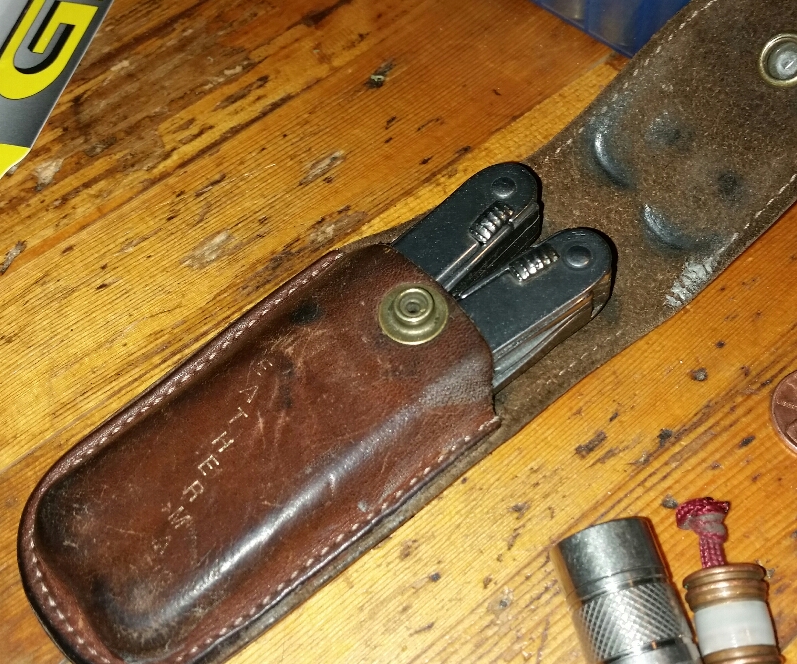 It was new, old stock then, wish I’d thoughthe to grab another one… Be impossible to get another now, IF I ever really have to replace it.

That was late 2006 early 2007.. 11 or 12 years of almost(have carried the Vic probably 80% of that time)constant use ain’t bad! Will make a new loop and stitch it on this week. Might just stitch new loops bottom end to the old loop, so I don’t have to go to the hassle of curved glove needles and working inside the bottom of the sheath.. Gonna use 550 inner strands, or if I can find my roll of Gearward Kevlar string that a friend gifted me a couple years ago, I’ll use that.  That sheath gets a lot of abuse where I wear it, ran into and against everything, laid on, scraped around on machinery and the ground. If nothing else, I want to try to garrantee the stitches hold!

I actually wrote this post above, about a week ago. Never got it posted.  I’ve also not gotten around to fixing the belt loop.   But I have been carrying the Spirit.  A couple days loose in a rear pocket, but that got old fast.  Dug around for my bag of misc. sheaths, and got out a slim nylon Leatherman version.

Fits like a glove! A little tight upon re-holstering, but not bad. Yes it’s velcro closure, but it’s actually not been bad so far!  I don’t think I’d want to use it forever,  and I’ll still fix the leather one, but it works perfectly fine for now.  Big bonus is that it’s almost as slim and compact/unobtrusive as the leather one.

Another bonus, was that it has the room in it to hold the Spirit with the pliers open/handles unfolded!  I must have unconsciously known this, because I suddenly found I’d been carrying it that way for a while during a job.  That can be very handy at times!

Three knives, and some hot plastic.

Posted on December 9, 2017 by akadventurer

Been sorta sick, no energy at all since Tuesday. Doing nothing was about to drive me nuts. Figured what the heck I’d head to the shop and try something that’s been on my mind all week.

Finally got around to doing a sheath for that Vic paring knife. Made at an angle, for neck carry, left hand draw. As seen as if wearing; 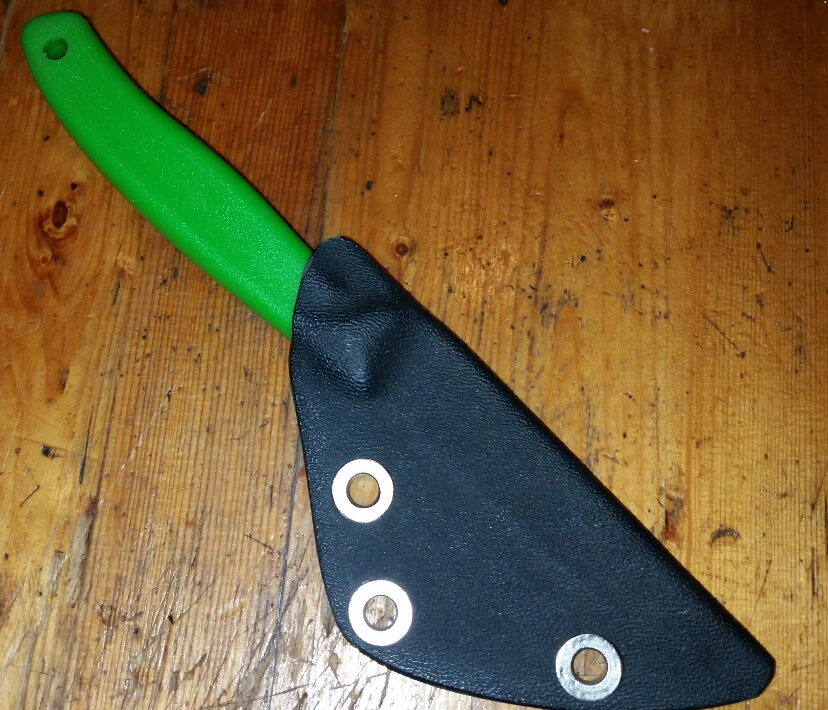 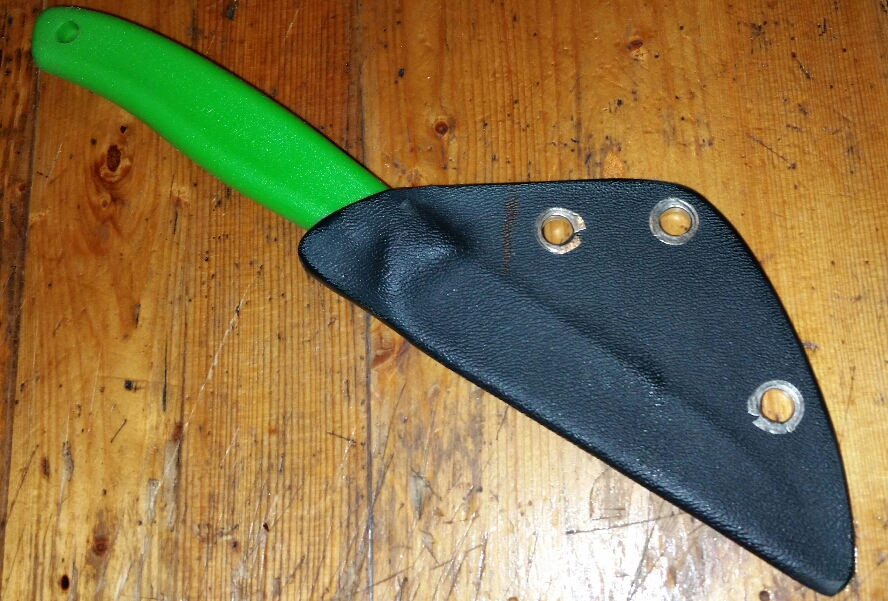 Not perfect, the tension could use adjusted a little, it’s super tight to draw. But snaps home good, and ain’t going anywhere. Will see how it does in actual carry before I try to loosen it up any.

Also, an idea I had while sitting around killing time this week, with two items that were on the table at the time. 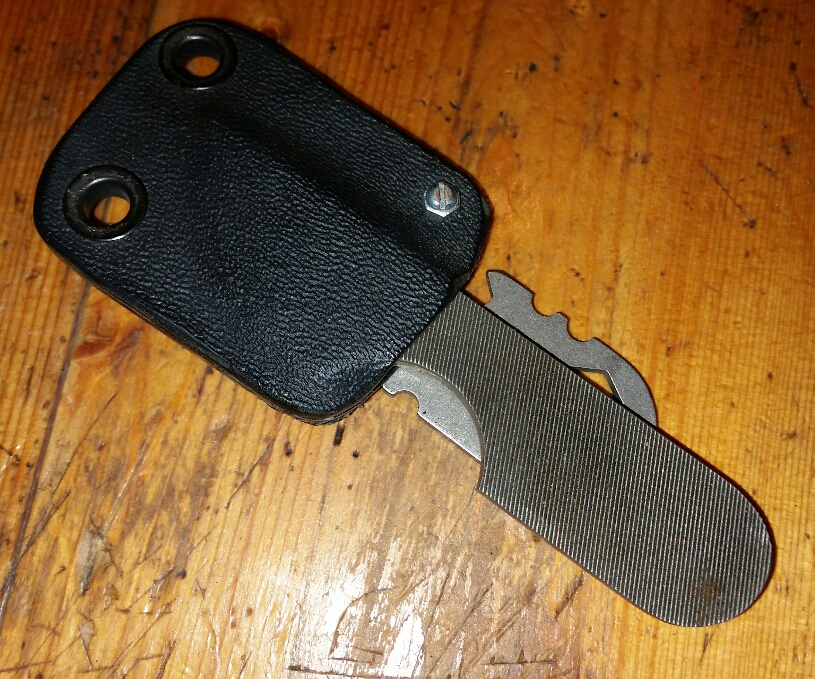 My second JW Knives Bandicoot 2.5 and a cool little file karidashi made by a friend being about the same size seemed like they’d make a nice minimalistic carry paired together. Started out with opposing angles for individual grips for draw, but having to add a tension screw ruined that; ran out of room.Had to re-heat and repress this sucker about 5 or 6 times to get it to work. Lol. 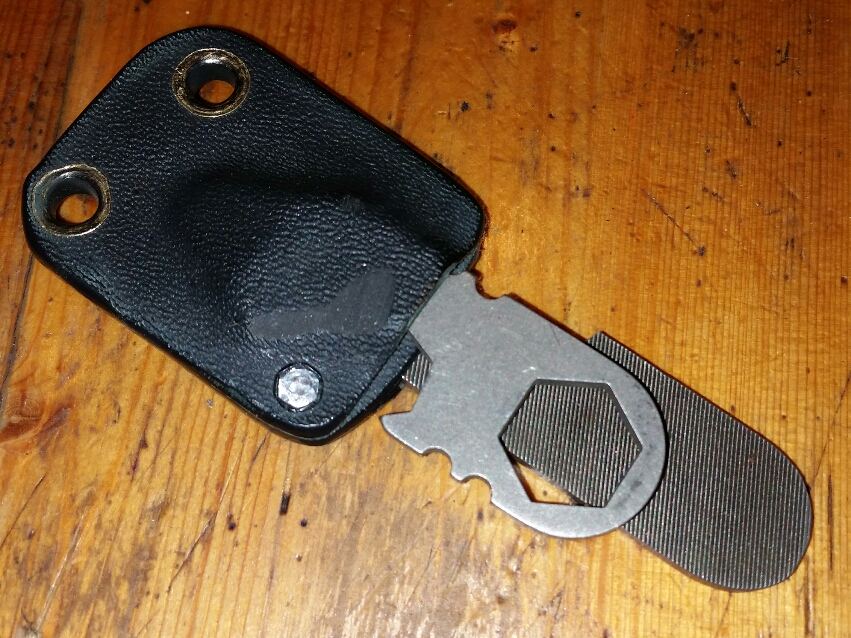 It is 3 layers of kydex, and I’m glad it was the thin stuff, the eyelets I have were almost too short as it was! 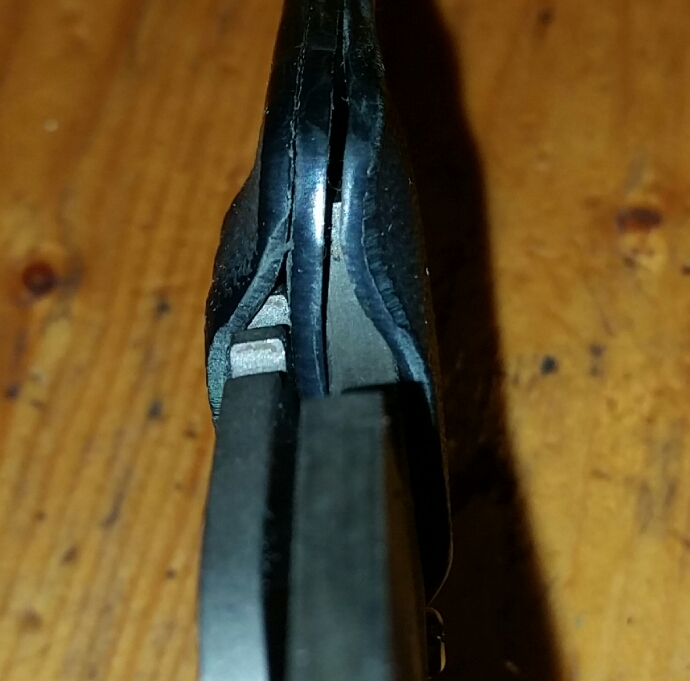 I’d planned it with the three, but tried it with just two outer layers once I had them formed, when I started with two different opposite angles for thetools… It Almost had enough support and tension to leave out the center layer, but not quite.Tension isn’t perfect, you have to finagle aroundwith the Bandicoot to get it back in right, but itholds and works. As a side note, since I had it close by for all evening in the shop, that ‘dashi got used as kydex deburing and scrapping tool for all holes, melted foam(whoops), etc. Great little scraping edge!

And one more. Found this knife in the house a few days ago, was one my Dad had. IIRC he got it at a yard sale a neighbor had about a decade ago, because of the ship scrimshaw(dad loved the big sailing ships) never really used it for anything. Not my preferred style of knife except the wicked trailing point clip blade.. Never have seen much practical use for thus style/grip. Then again, it’s pretty comfortable, and damned sharp, figured why not? I’ll try it for a edc utility knife, and maybe put it in my hunting gear to try ad a skinner… What have I got to lose? 🙂Doubt it’ll be any super knife, it’s a Frost Cutlery, and marked “surgical steel japan”, meaning probably 440A… or 440B.. but like I said, it was sharp, and I got an even more wicked edge on it now, can’t hurt to use it. 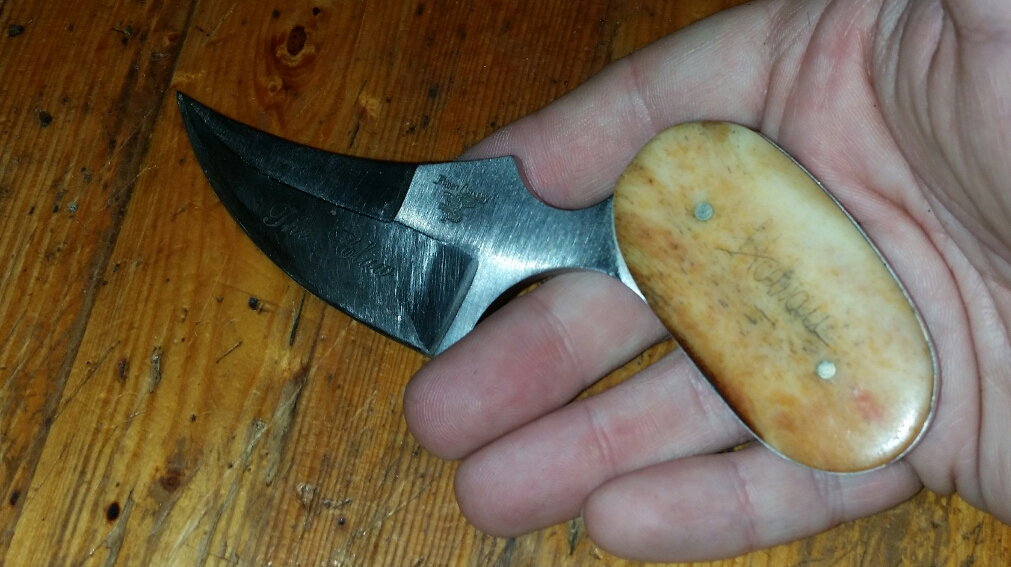 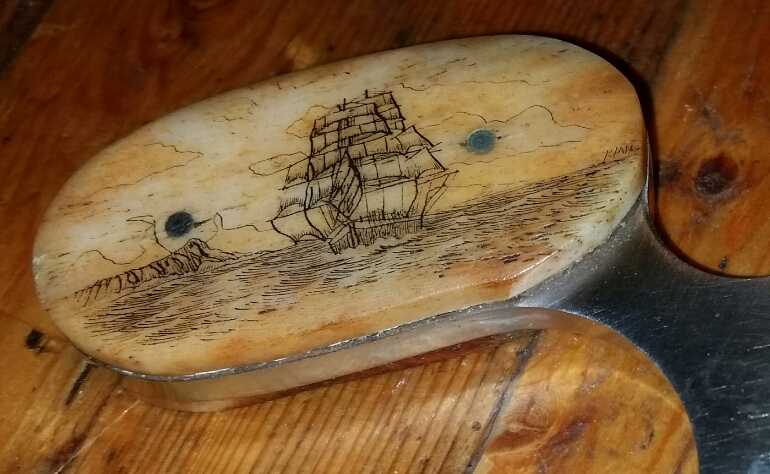 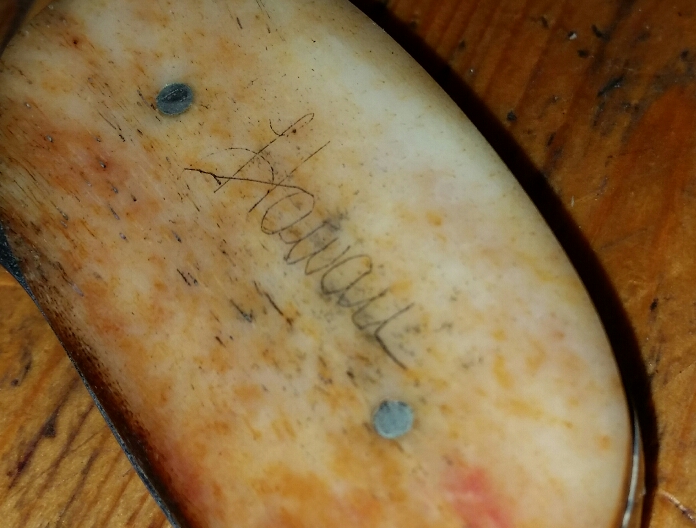 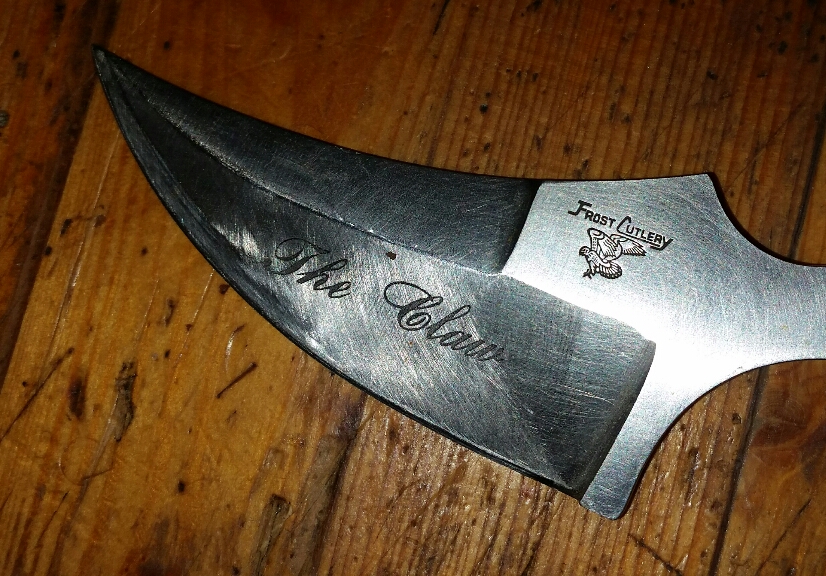 I remember it having a cheap sheath but couldn’t find it. So… it got added to the docket for kydex work tonight. 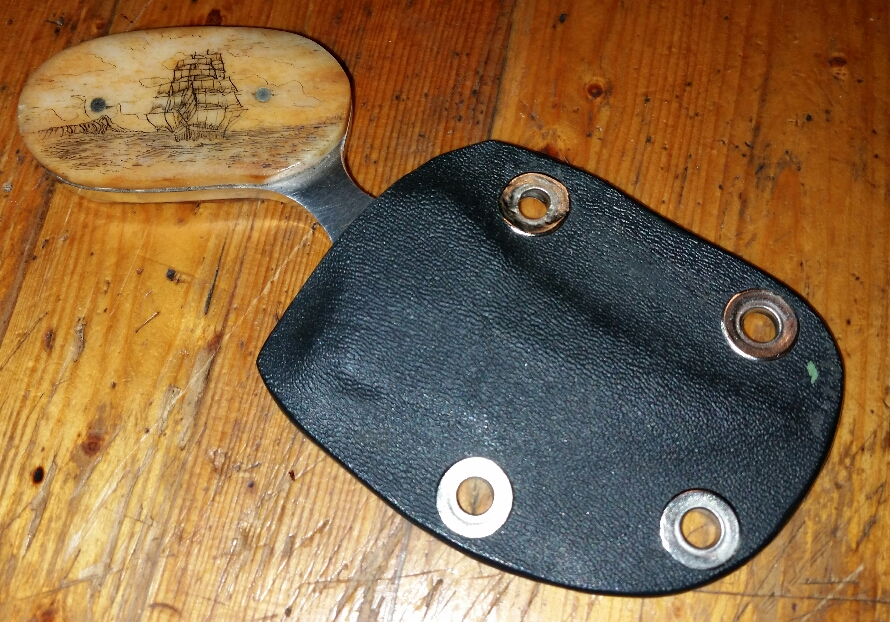 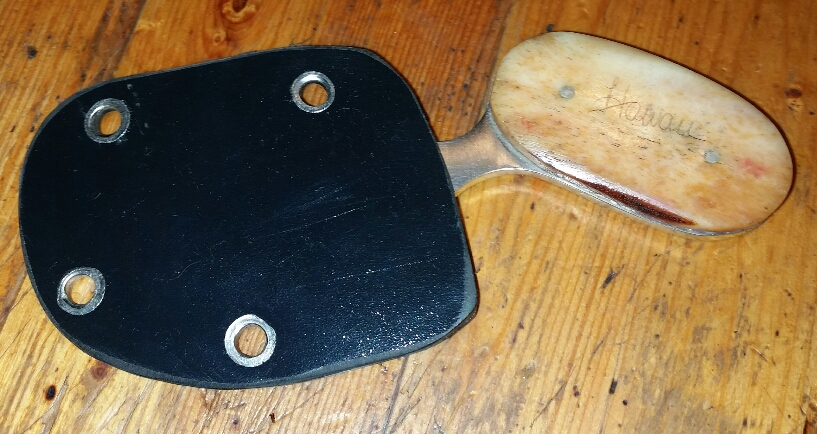 Will make a backing piece from leather later, planning on a simple belt loop for horizontal carry. This one took about 4 pressings too. And a second back piece; pressing both to fit the blade didn’t work out. I no longer Hate working with kydex, and it’sgetting easier… Sort of… But I won’t say I’m too fond of it either. 😉 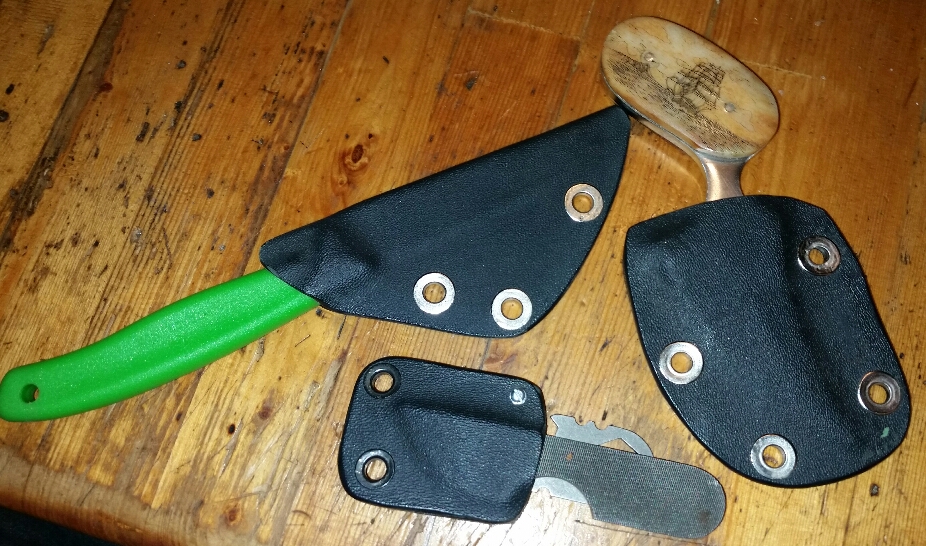