Posted on November 5, 2019 by akadventurer

I’ve only had it about 1.5 weeks, not a lot of carry yet, so I really have no need for anything different than the pocket holster, yet.

But I’m sure a time will come when I want to belt carry it, so why not go ahead and make ond of my holsters for it?

No construction pics this time. Its the same as my last two, the first for the Bersa, then one for my Bearcat(Both can be found on the blog), this one is just scaled down slightly for the LCP. 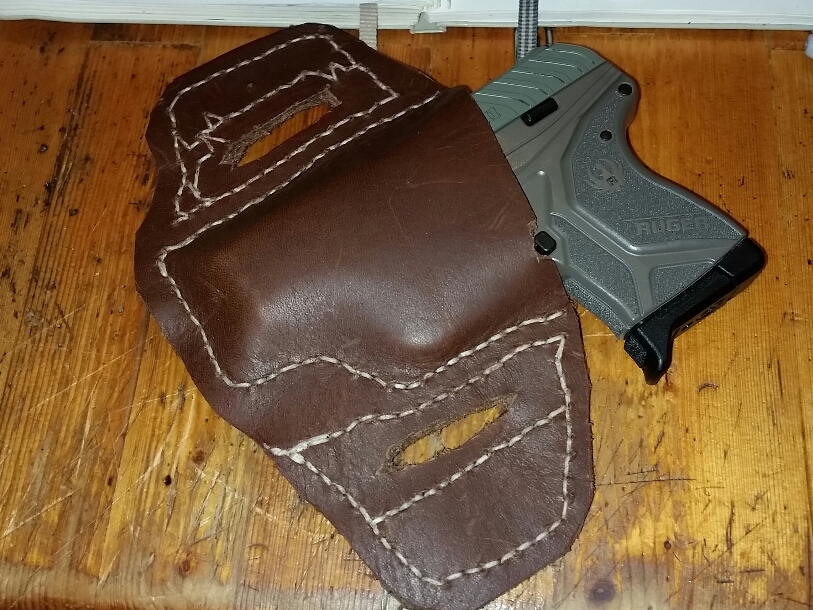 I lost a little of my preferred forward “FBI” cant, but its still fine. Small notch to clear the mag release; This way it could get pushed, but I was more woried about it being pushed with the leather over it. This way its shielded/flush with the leather.

No retention strap yet. Its a VERY tight fit right now, plenty of hold. After it breaks in and stretches some, I’ll look at adding a strap, that way the fit and length will be right.

With its inspiration, the first of them, made for the Bersa. Thatcone is beoke in, but still snug, and still works great after 3 or 4 years.(Edit; I got curious and had to check. 6 years! Made in august of 2013!)

Honestly, the LCP2 actually fit the Bersa holster rather well. It would have worked, except the strap length.

Buf it was a touch too deep, I’d end up bending up the lower tip of the holster in use, and the long strap would be annoying.

Posted on November 1, 2019 by akadventurer

Part two, or, darn those gloves! 😉

Parg one was here;

Have a pair of nice heavy deer skin work gloves that I wore almost all summer. They started developing holes about a month and a half ago.

they’re broken in, already stained– don’t have to worry what I get on them, they fit me, and are comfortable as all get out now… I’ve been missing them!

With socks its called darning. Maybe only on knit socks. Ive been saying I’m darning gloves. But they’re not knit, and darning might not apply even to knit gloves… lol.

But at any rate, I’m enjoying it, it improves my sewing, saves some gloves, and fills some time.

I still have one big hole and one small one to patch, and two seams to re-close.

So, thus, onto the finish!

Not perfect by any means, but I think they’ll last a while again. A bonus, I’m getting better, and faster at the sewing!

I switched to a skin needle– its a cutting needle, a triangular cross section and sharp edges. Goes through the glove leather easier.

I also changed to a smaller, but stronger thread, that’s easier to sew with.

What I had before is a heavy waxed braided cotton that’s sold for leather work.

What I changed to is a braided synthetic fishing line. Designed for ice fishing, it has a high abrasion resistance, and is s 20# test. It looks likd a super fine and weak thread, but is some tough stuff! Should last a while anyway.

So there we have it. probably an hours work that took me a couple weeks.

They’re not perfect. One finger got shorter because I over trimmed. One got longer from over compensation for the previous over trimming. The last thumb I did stayed in length but got narrower/tighter,

but I have my gloves back!

Posted on October 13, 2019 by akadventurer
Have a pair of nice heavy deer skin work gloves that I wore almost all summer. They started developing holes about a month and a half ago.

Since I was welding that day, it meant finger burns (yes we had dedicated welding gloves, but generally I don’t bother with them, they’re a heavy leather gauntlet that allows no dexterity at all.)

My jobsite fix that day was a quick wrap (double layer glue to glue on the holes so it didn’t stick to me!) of gorilla tape over the finger tips.
I gotta say I’m impressed, after a month of work, and you have to remember I’ve been working in a crawl space most of the time so its not just work wear, but crawling wear too, that tape was scuffed and a bit softer, but still stuck, solid, holeless… I HATE duct tape with a passion because it never stays on anything even duct work, but this stuff was great!
But anyway, 3 more holes later and I grabbed a new pair of gloves. I have no idea what the old ones cost, they were a gift, the second pair out of a two pack a friend got. And I can’t shop where they came from(costco) so a direct replacement is impossible.
But the replacement I got at Home Depot was $25 a pair.
I’m sure the Costco ones probably cost less than that, and about 6 months on a pair before they wear out isn’t bad for good quality, real leather, all leather gloves.
But at prices like that I’d still like to prolong their life if possible. And besides, they’re broken in, already stained– don’t have to worry what I get on them, they fit me, and are comfortable as all get out now… I’ve been missing them!
With socks its called darning. Maybe only on knit socks. Ive been saying I’m darning gloves. But they’re not knit, and darning might not apply even to knit gloves… lol.
So, thus, I sat down with some scrap leather, needle and thread, and have been slowly fixing them in my spare time the last few days.
This has worked well so far, a couple seams resewn, and one finger tip I cut out the holed area and patched. Some of it I’ve just whip stiched on the outside, some thing I’ve turned them inside out to have the seams on the inside like original.
It has ironically been kinda hard on my hands. For a while now any hand sewing I do, or similar work that takes a good grip on small tools, and fine motor skills, has made my hands go numb while doing it.

Add to that some muscle damage and inflammation that I have right now in my shoulders/arm pits and lower arms that has been doing a carpal tunnel like effect of a piched nerve or restrictions in blood flow; making my hands tingling or numb over most of the past week anyway;

It makes this extremely slow, somewhat frustrating, and sort of painful to do.

But at any rate, I’m enjoying it, it improves my sewing, saves some gloves, and fills some time.

I still have one big hole and one small one to patch, and two seams to re-close. 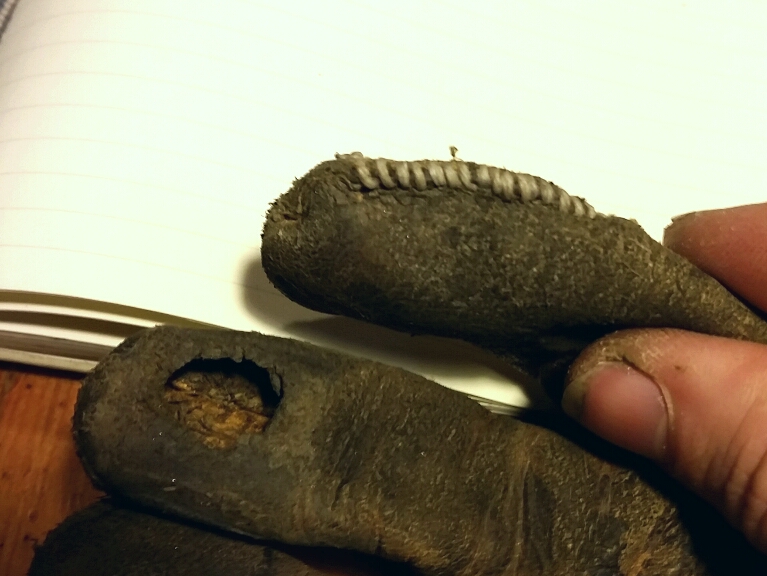 Posted on September 28, 2018 by akadventurer
When taking my buck saw out for some work yesterday, I remembered I was going to make a case for it from a canvas painters tarp I’d gotten.
I’d cut up a pair of old jeans for making char cloth a few weeks ago, had a lot left on hand, had it out for another idea yesterday, so it was on hand.
Liked the idea of denim better than the canvas tarp.
Legs are great lengths of material, but a bit short on that pair I cut up because of worn cuffs and where I cut them before.
Had a brand new pair I can’t wear (bought 2 years ago when losing weight fast, could almost get into them. Got hurt and gained weight last winter, I garantee I can’t get into them now). So that’s how I ended up with a fancy, clean, spanking new denim saw case!
Cut a leg off, split about 1/3 and a taper off one side, sewed up what was left.
By hand. “Cheated” to get it straight and even. Pinned the edge/seam allowance where I wanted it, then clamped it up in my 2′ long wood workers vise on the bench, held just below the stich line. Think of it as a Loooonnng stitching pony like used for leather work. Worked a real treat!

Not the nicest stitches in the world, but they work! 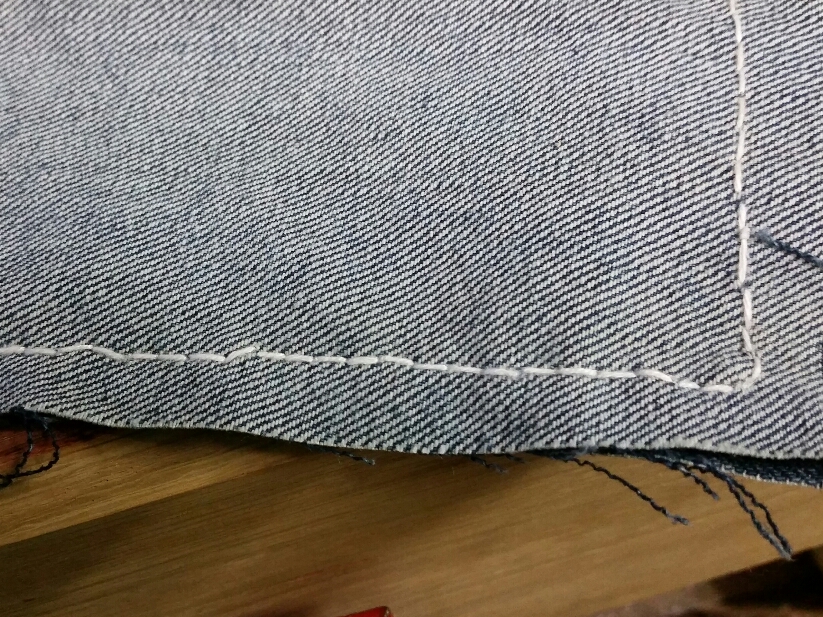 Sewed the old top end shut to form the bottom, leaving the hemmed cuff end as my new top. Figured the wide hem to be hollow, can run a draw cord through it. Forgot to do it before stitching the side…
1/16″ brass rod, loop bent in end to pull the 550 cord, bent in a loop, and I fished it through the hem. Little tight at the existing side seam, but I got it with come cutting fishing and finagling the rod through!

Need it longer but it’s (gasp!) the only 550 I had on hand. I’ll use it to pull a longer chuck through later. 🙂
Messy stitches to re tack down the hem ends where I cut it..

I wanted more length past the saw for fold over, but 28″ inseams don’t offer much over a 24″ saw… 😉 It works though!

With the saw in it;

Posted on March 23, 2018 by akadventurer
I needed an ammo pouch. Saw a nice one, flat bottomed to sit up nice, on Jas Townsend for $6, but they get $10 for Alaska shipping. Nope.
And besides, if I make the slingshot, I should make the pouch too, right?
Digging around in the shop looking for one set of leather pieces I’d bought, and found some others I’d forgotten. Knew I had them but had forgotten how big they were… it’s thin split garment weight deer hide. The tan a bit heavier.

Went with the light tan for the pouch, the wine for a tie cord.
Wanted the round flat bottom for it to sit up nice. Had to figure out how to do that as I went.

Punched holes with an awl, and stitched round the bottom, then up the side seam. 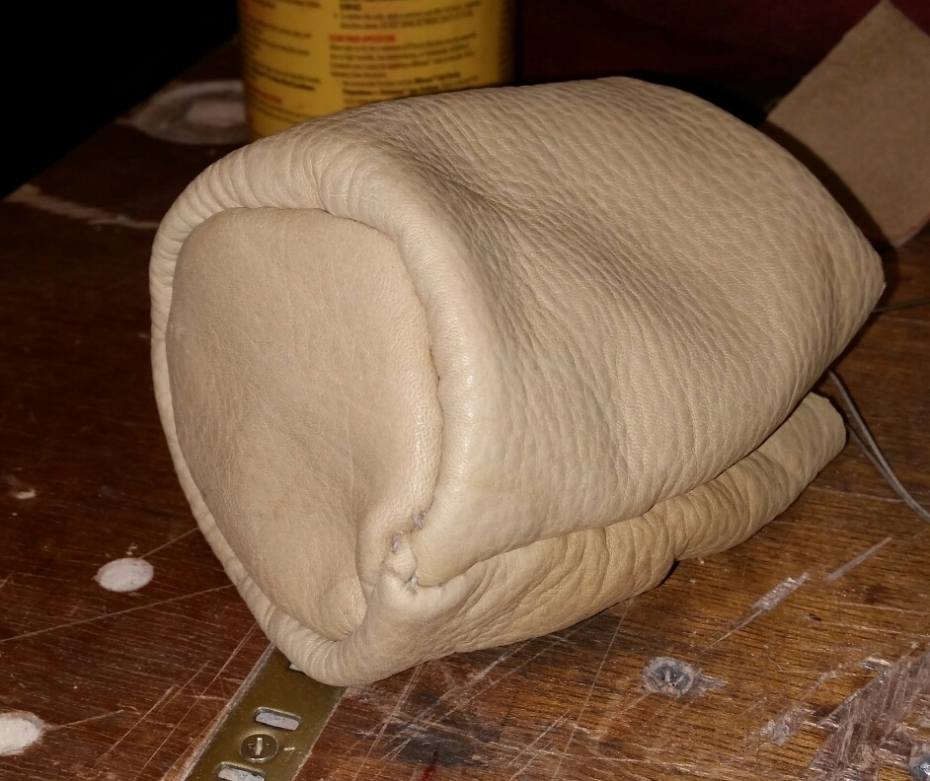 Forgot to measure for thus first, lucked out and got it perfect, I cam just get a paw into it to dig stuff out. Only sizing I did was trace around a Min wax stain can plus 1/4″, then a height that looked nice.. 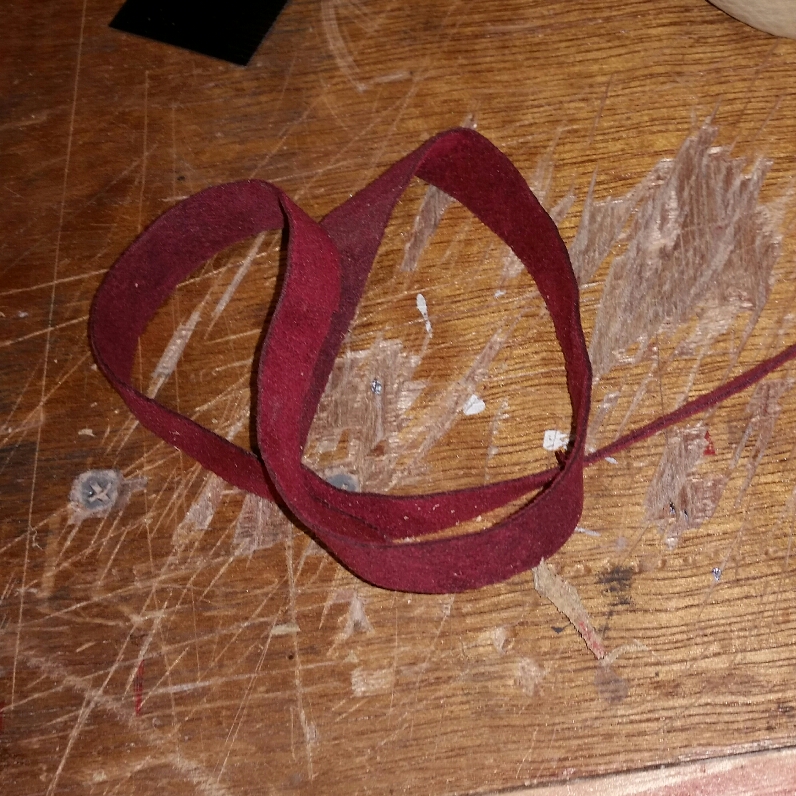 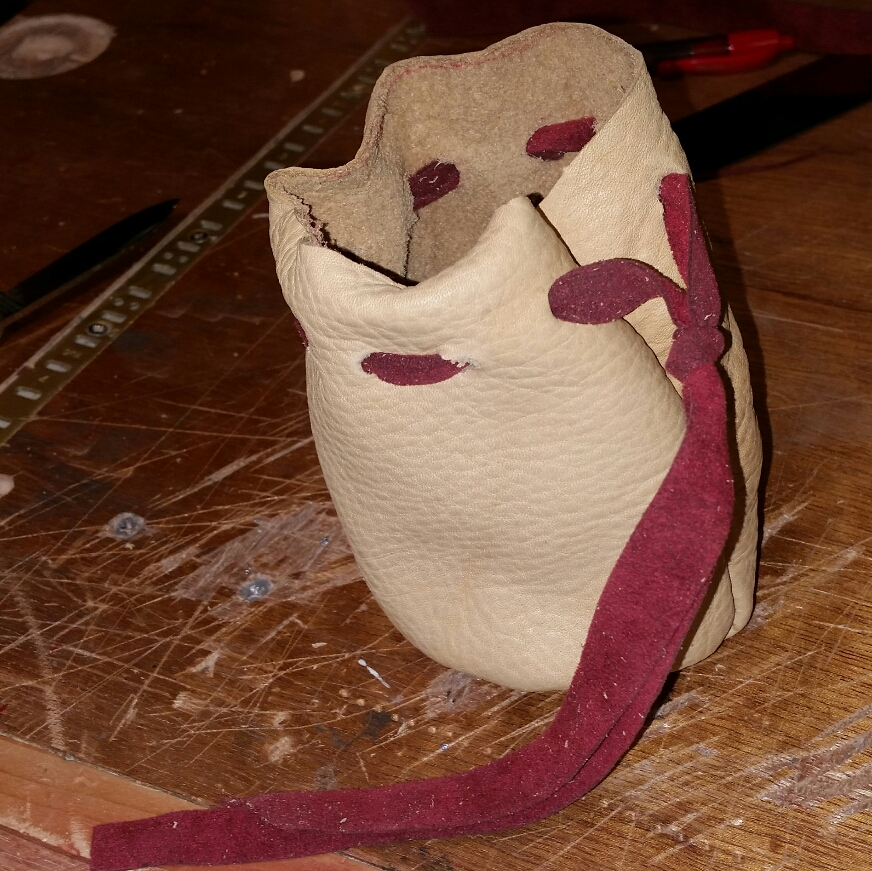 Made a sliding knot for a cinch closure lock. Works good.