Posted on December 2, 2018 by akadventurer

These things are popular right now, with the high torque long battery life of modern cordless drills, its verry easy to drill ice holes with them.

Also popular are these adaptors to run augers off of hand augers.

Adaptors for the hand augers run around $25. But as far as I could tell, the shaft size was different than the gas augers.

And besides that, $25 for something I could turn myself on the lathe? Yup 😉

So, auger in hand, in the shop, and a couple hours later I had this;

Before and after, it’s turned from solid 1.5″ aluminum.

And then I decided it needed a side handle for stability. 1st version with a roller bearing between ring and shaft failed… Accidentally ended up too narrow to drill and tap for thd handle stud. Oops!

Second try I left out the bearing to save time and work, I figured if the whole concept works, I can do it later. 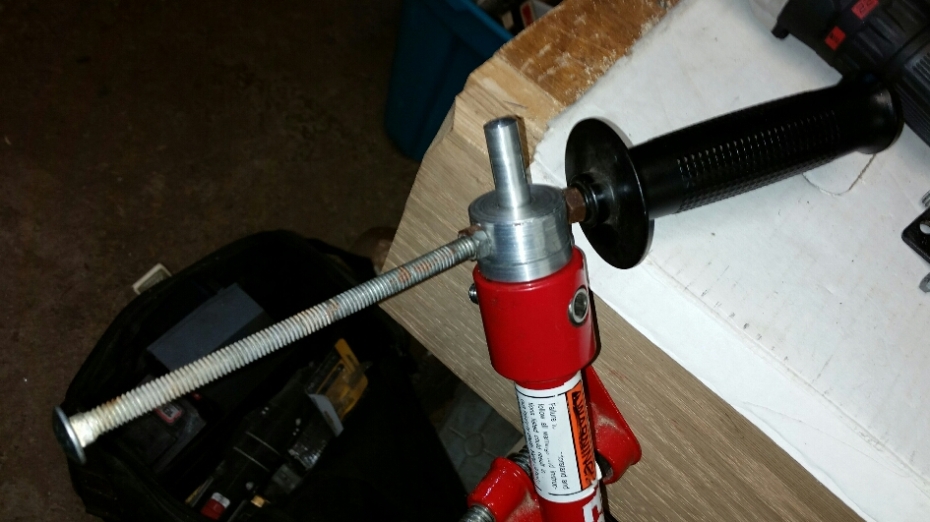 Opposing stud is for an added safety catch, the works can’t drop through the ice… Technically if the drill comes off though, the auger itself can– Considering the drill can’t got through a 8″ hole when on the auger, I kinda missed the boat on thst feature. Lol.

But anyway, there she is!

Tried it yesterday, and it does work, it will crank it in the ice, and drill holes!

But its pretty slow.

Faster and easier than a hand auger, for sure. But the work needed isn’t something I’d want to subject this drill to very often.

We tried it on my buddies bigger drill, and it ate through pretty dang fast. Not as fast as the 6″ K-Drill, but very respectable!

Faster/more powerful drill than what I have, and it’d be perfectly fine.

So yeah, it works. But I won’t be using it. Bigger drill would be a couple hundred minimum. Smaller lighter auger bit, about $60. But since I have the nice 43cc gas motor for this one, I really can’t justify any of the cost.

I’ll shelf it. If I end up with a more powerful drill, or a hand auger, I’ll have the option to try it again.

If nothing else, it was a fun project for the lathe, I enjoyed it. 🙂

One thought on “Custom ice auger adaptor for cordless drill.”