After my moose hunting trip this fall, a sleeping pad I’d borrowed to take was misplaced. Wasn’t in my gear, and when the boat was unpacked, it wasn’t found. We figured it blew out of the boat on the long drive back, and hoped someone found it on that winding mountain road– If I lose something, I at least hope someone gets some use fromy it, that it’s not wasted.And I’d just obviously get a new one for the guy I borrowed it from. I did go buy a new one. Couple weeks went by before I got to take stuff back to him. In that time, my buddy cleaned Everything out of the boat. He found the padd, said literally it was stuffed so far up under the front deck a hurricane wouldn’t have budged it! None the worse for wear, I returned that pad to my friend, intending to return the new one, get my much needed $45 back. I did think about trying to still give my friend the new one, but he wouldn’t have accepted it if the old one wasn’t lost.. After using the first padd in an emergency, sleeping on it on Cold front deck on the boat on the river one night, I was sold on it, figured I’d get myself one like it before next season. Just didn’t really want to spend the money now… Didn’t get around to trying to return it till after the return period had ended. Oops.In that time period I’d been also looking at small foam pads, after seeing someone at BCUSA carrying a sitting pad in their day bag. Found something I never knew anyone made; kneeling pads! Some for camping, some for gardening, work etc. My dad used to cut sections from the old 1/4″ closed cell foam sleep pads for kneeling to work, but I’d never seen anything sold for that. I’d started carrying chunks of cardboard in my truck box for roadside, job site etc kneeling, sitting, laying etc on cold or wet ground. Realized I should have had a foam one like dad used to make in the truck years ago, just never thought of it! You can see where this is headed, right? Since I have it, but don’t need the padd for sleeping till next summer, and can pick up another one then if I need it (I actually use a Klymit V-luxe air pad the most); In the mean time I can save myself the cost of keeler pads. I’d also found another great use for that pad on the hunting trip, as a chair pad. Took my folding canvas camp chair along, and it was great. But as id found before, sitting too long in one of those in cool wet weather, especially with a breeze can freeze your back and butt; its just cold canvas your sitting on, stays cool and bleeds heat fast.. I laid the pad in the chair and with a light sleeping bag over my legs was very comfy for early and late river vigils waiting for bulwinkle.

I did this last week a few days before ice fishing… I use the same chair for that activity, and sitting in that chair even with winter gear on can royally freeze your ass in a wind on a lake @ 10F or colder… So 30 seconds laying the new one in a chair to measure length needed for seat and back, then another 30 seconds with a pocket knife, cutting along the thin fold line. One chair pad made! Then what was left I cut into two equal sections, also cutting on the folds. Go two kneeling/sitting pads, one for my hunting/camping/hiking gear, and one for the truck. It was so warm last week for ice fishing I didn’t bother to take the big chair pad along, just took a small one. Never needed it, it was so warm, and the fishing was so good I spent a lot of time standing anyway. Anyway, it was still in the cab of my truck last night, got home late, 40F out (!) light wind, clear sky, stars out and Lots of northern lights. I killed the yard lights, grabbed the pad and sat on the tailgate of my truck to watch the show. 40F ambient is great, but a metal tailgate will still be 0F or colder after a week if that and freeze yer ass off! But with the pad I was dry and toasty. Size was good too, enough to sit on comfortably, but not huge to store. Gonna need two more pads now… One to keep as a sleep pad, and another to make more kneelers, for other uses/places/vehicles. It is/was a Therm-a-rest Z-Lite pad BTW. 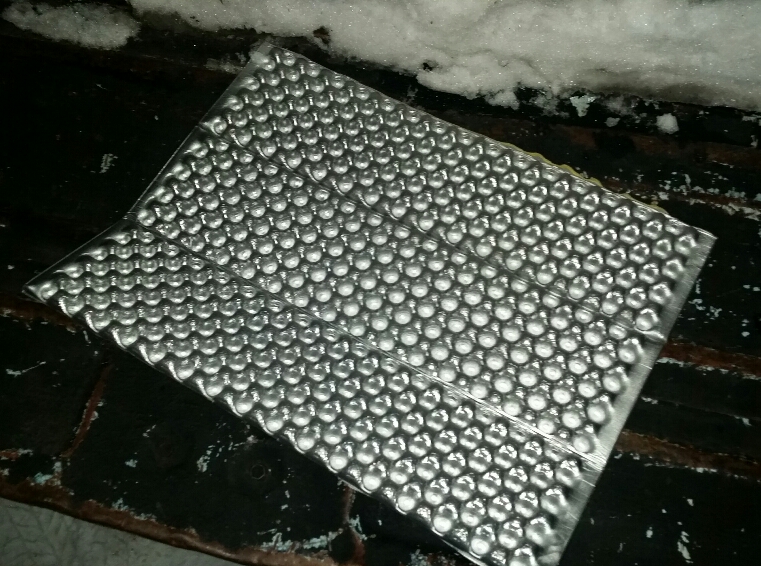 Thermarest does make a sitting pad, shorter than the sleep pads, and cheaper at $15. Same design, same materials. It would have been too small for the chair pad I wanted, but I might get a couple of those for making more kneelers. Think I can get two of this size kneeler from one of those. 2 for about $15 ain’t bad!

As it is now, two sit/kneel pads and a chair pad that could be used as a short sleep pad isn’t bad at all for $45! 🙂

One thought on “For warm dry knees! ”