Posted on November 5, 2017 by akadventurer

Got 4″ of powder last Thursday night, finally enough to try out the ATV plow!

I built the mount, and had it all ready in early October of 2016. But the night I finished it, and went to test ride with it mounted, is the night the clutch went out. I didn’t know what to do with the clutch until spring of 2017, so the wheeler and plow sat unused all winter. I never got to try the plow until this weekend!

SO, Anyway, I used the Prairie to plow my yard and driveway Friday. Works great!

One small section of drive plowed;

Took about the same amount of time as it does with my truck… Truck moves more in one pass, but takes more time to maneuver…

The wheeler is smaller, easier to turn and has better visibility. But not as much power or blade size to move a lot at once. 50/50-90 kinda thing.  I’ll break it up from now on, truck for large bulk areas, wheeler for the tight spaces, trimming up.

Did have one problem. The plow doesn’t have an upward stop for lifting the blade… Just where you stop the winch. So if you go too far, it just keeps pulling. Sometimes it’s hard to tell if you have it all the way up or not.

Broke some welds on the mount pulling it up too far.  Will need to re-weld that, and make some sort of positive stop that hits the bumper or something, so I can tell for sure when to stop the winch..

I’m thinking just a upward angled bar braced off the plow, that would hit the bumper, and be a solid stop I’d feel. Maybe have it high enough that I could see it… Something like that.

Got the main mount piece with the breaks inside melting/drying out now, will get it done and back on in the morning,  so I can plow the new 2″ or 3″ tomorrow afternoon.

I’m really not surprised it broke… I’m only semi professionally trained at welding, still not real good at it, and this was done with a rather light welder for steal this heavy…

And it was being torqued at this area by a 2000# winch, with about 3′ of leverage added… It simply tried to hinge on the welds and sheared them, and is now hinging/flexing others.

Looks like I missed welding straight across the back edges too, which would be a lot of loss of strength against pull in this direction.. Whoops.

And the plow itself hinges onto this piece. Breaking the plow side would have been worse too, mainly for being able to get it into my heated shop where the bigger welder is set up, and I’d probably have gad to do a lot more re-engineering if part of that broke.

All in all, if it was going to break, it’s the best area for it.

This time I’ll full box all 4 edges where the two pieces stack,  maybe drill a couple holes in one and plug weld it down to the 2″ square tube… Maybe add a cross plate above the tube. And use a much bigger welder for more penetrating heat. 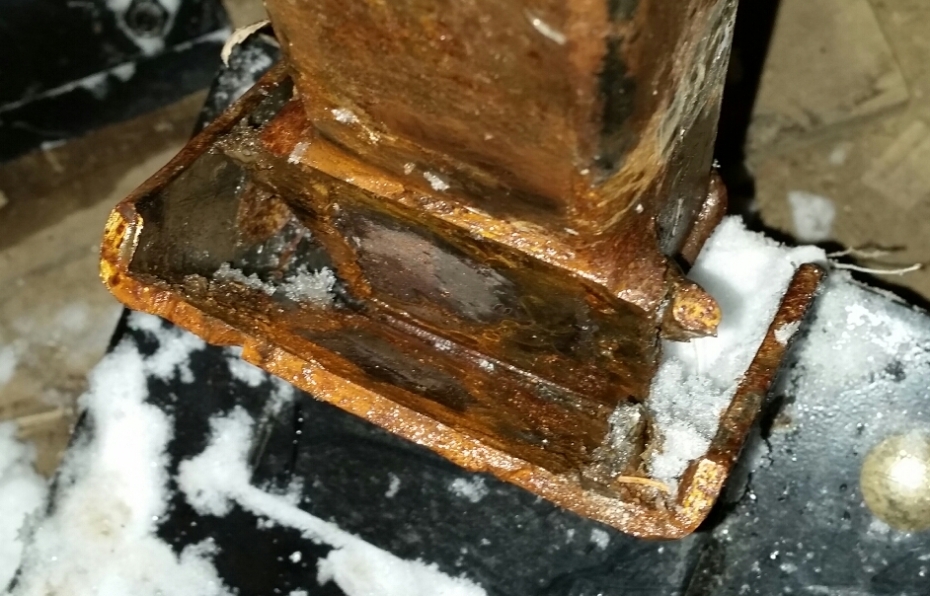 Yeah, apparently forgot to paint it against rusting before I parked it last year too…