White Fang, is that you?

A real thrill I got on this trip, was a little hike into the brush…

Last Monday(18th) afternoon we were setup sitting on a ridge, waiting to spot a bull they’d seen earlier in the day. And I do mean ridge… only about 100 yards straight up it base to top, but its rise was about 60° or 65° (my best guess) or steeper… strewn with downed trees(previous forest fire burn area), and 3 or 4 years of new growth birch/alder no bigger than your wrist… Going up was interesting. Coming down was quite honestly downright suicidal. I couldn’t make it all the way up, I got about 40 or 50 yards, just high enough to get me above the flat land tree tops to a good valley view…

They went to the top, and about 1/3 of the way around the hill to my right, better view to the river and further out. Hour or so later, just about the time I getcomfortable that I’m not falling off the hill 😉 4 shots from up top.

Up I get, rifle ready, skoot around the hill a bit, see a big flash of white go down in the brush and small spruce trees about 400 yards out.. I figured it was the white light refection off of an antler palm.

15 minutes later one buddy goes down past me 30 feet off… I follow. He stops, tells me “no moose” in a wisper. Huh. He then says “wolf”“Wanna come along?”Hell yeah!Good excuse to get the hell off this suicidal slope before I have to do it at dusk! 😉Turns out they had watched this lone wolf come in from up country, couple miles out. It was moving slow, looked off… like injured or sick. They decided we really didn’t need him in the area, danger to us, and to the game we were stalking, so he took it. Pretty good hitting a moving wolf at 350 ish yards! It hadn’t dropped dead though, and kept moving a bit till it stopped…So, here I am using tracking a wounded predator in the brush, as an excuse to get off a steep hill… lol. Ok, maybe not my smartest move ever.

But I had to go… just one of those cool things you can say you’ve done, ya know? If you survive it.. lol. Didn’t want him going out to do that alone either..And it was thrilling, if not a touch frightening. Great experience.One guy on the ridge, us in the valley, two course corrections waved from the ridge, didn’t take long to find it. Still breathing, back hips broke from the shot. Took two more well placed .308s to kill it. Tough little guy!Turned out to be a bit scrawny, and when gutted, it’s stomach was Literally empty. Good thing I went too, if just to help get it the 1/4 mile back to camp. That wolf had to weigh pretty close to what my buddy does… no way for us to tandem carry it in that brush, he slung it across his shoulders and did it himself, rifle slung around his neck. Took us 15 min ish, in a dead straight line, or as close as possible, no stops… he couldn’t or he’d never get going again. Pretty good hije for me too, I ended up with my pack on my back as I started, but also with his pack on my chest... Ugh. I don’t recommend that kind of high stepping dense brush, downed tree, mossy ground hiking with weight on your chest. About killed my lungs! Don’t know how he did it with 150lbs of K9 on his shoulders.. Later upon skinning, we found massive trauma to its neck, and shoulders, and one front leg. Puncture wounds in its neck and shoulder, like you’d expect from a fight with other k9s. Wounds only a couple days old if that.Figure he had a fight in the pack, and lost, got drove out. Smaller animal, probably young. Not acustomed to hunting alone he wasn’t eating, and recovering from wounds, why he moved so slow coming in. Honestly I think we did him a favor. Winter is only a couple weeks out up there, if that long.. those wounds, and as thin as he was, I really don’t think he’d have survived the winter. 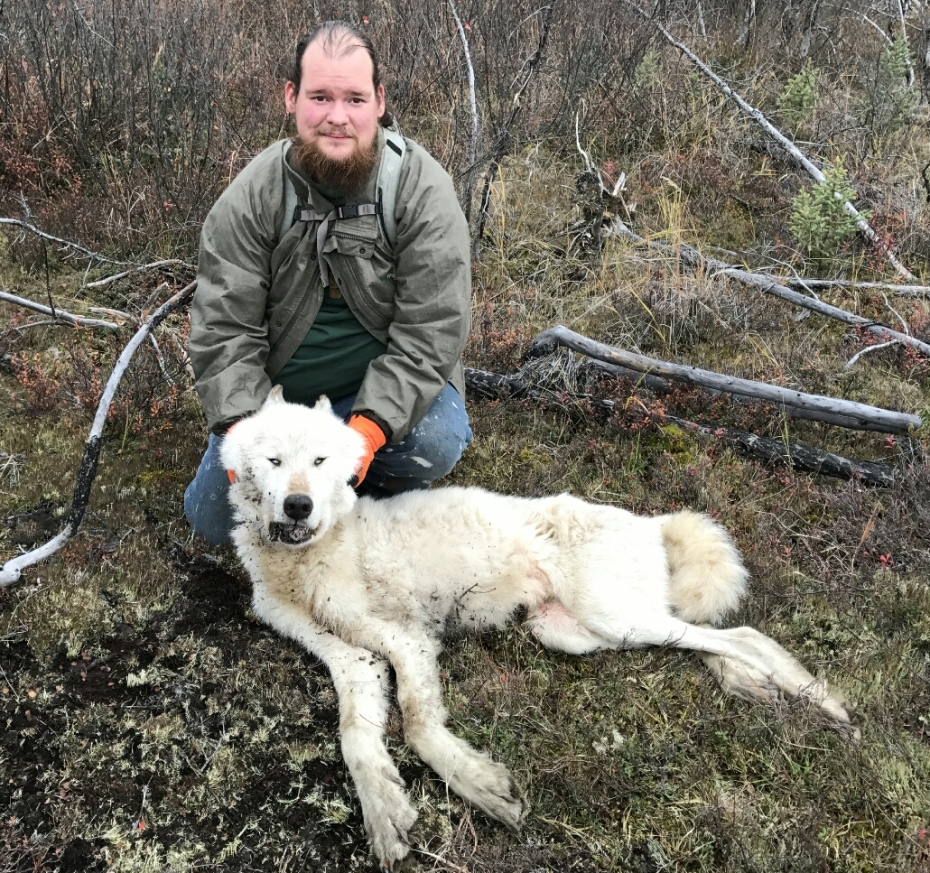 One thought on “White Fang, is that you?”