So, a little gear report from last week’s hunting trip.

More of a gear casualty report than a performance report. The item in question has worked great for about three years, up until we crushed them last Saturday(16th) night.My most recent, and favorite sunglasses. Dragon Cinch, that I got from user FACE in the 2014 EDCF secret santa. REALLY amazing they’ve lasted this long with me already, actually! We had an issue with the boat on Saturday evening, suddenly taking on water, so Brian dropped us to just off idle, headed to thensure back where the trouble was, and had me drive. (Turned out a heat exchanger line that pumps river water into the cooler to cool the engine coolant had come off… we were literally pumping water into the boat! Fun. ) So, for a few miles of driving I took my shades off as we turned around out of the sun headed back toward the dock… Laid them on the drivers dash. Later when he took over, I forgot them there, and to not have anything loose on the dash at speed, he pocketed them thinking they were his. I didn’t need them anymore, it was partly overcast and dusk the rest of that day… That night we wedged the boat on a sandbar at sundown… in a shallow unreadable section of river. Got it off the sand but couldn’t go anywhere in the dark. Slept on the boat that night, tied off to a mud bank. Sleeping pad, bag, and tarp strung over head. (THAT was interesting. I ended up on the river side of the forward deck, a 2″ rail the only thing between me and rolling into the river. Amazingly I got a few hours sleep. Good test of my sleeping bag, there was ice on our gear in the boat the next morning… I was comfortable in my 20° bag, and it was at least down to freezing. )Anyway, next morning we got going, moving good, into the sun… cant find my glasses. Hmm. He digs out his shades… but they’re not his. They’re mine. And he slept in his jacket. Yup. 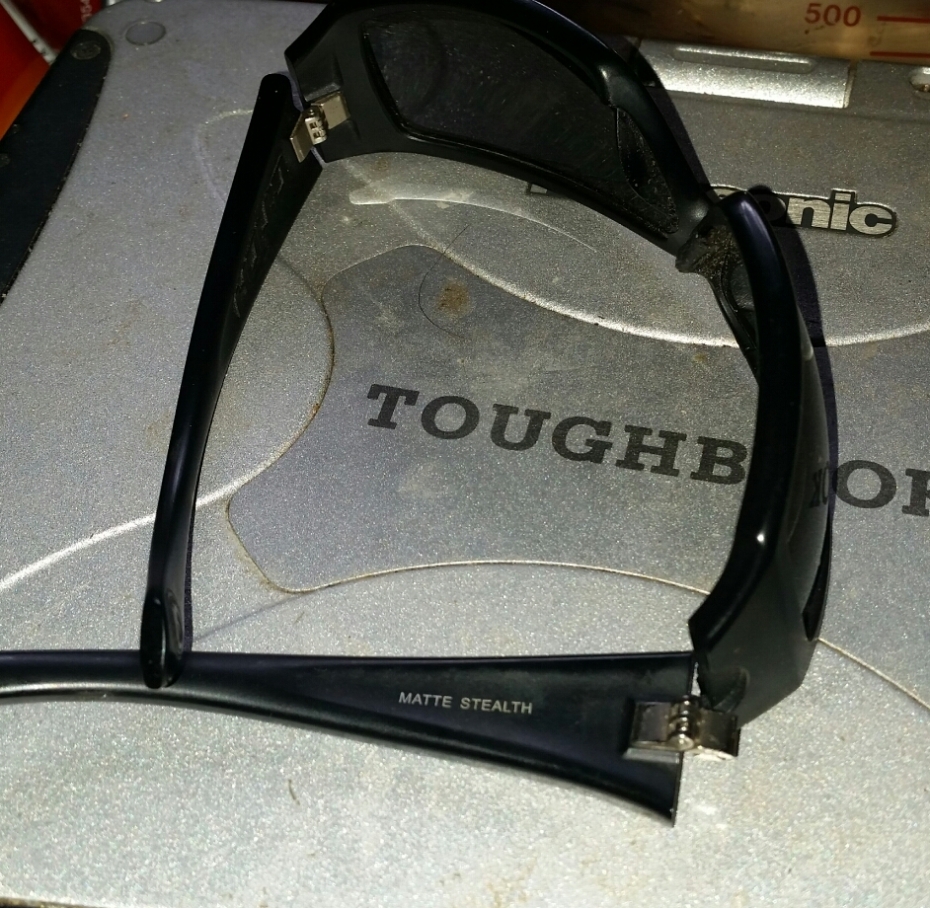 I dug around and found his in the passenger console, so we didn’t hit anything, and atleast the guy driving could see to navigate… I did wear mine the rest of the day, and then again the full day on the river coming home a week later. Found that worn under my headband/hat, that one ear piece wasenough, and the spring hing tension and frame flex held the other side in place fine. Little close to me on that broKen side, fog up fast not in the wind, but it worked, so I didn’t complain!No fault to anyone in their getting crushed, just one of those things that happens, especially when things get tossed around in an emergency(after all, the boat was sinking! when we both took our glasses off and they got mixed up).So, first things first after getting home, looked at the brand/model/numbers. Go googling, figure they are so nice I’ll just get another pair. No wonder they were so nice, and survived so long with me…New price, $180. So much for my usual preference of cheap sunglasses (for this very reason- cheap to replace when they get broke or lost… and it’s a cool song 😉 ) Serriously, people pay this for shades? Really? They’re nice, but… I dunno about $200 nice! Sorry, just surprised to find out I’ve been wearing fairly expensive shades, I guess.Ok, so I found some for as low as $75. Not sure I can justify that either. Maybe. Not now anyway.Don’t get me wrong, I like good gear, andheaven knows I have expensive tastes… But.. for sunglasses…Time will tell I guess. So anyway, I think I can fix them, a little super glue, and if I can find the packet of blackSugru (that ironically I got in the 2015 EDCFsecret santa!) they should be fine for a while.  🙂

One thought on “Cheap Sunglasses”