A buddy of mine is converting his outboard river boat to an inboard. Going from a outboard prop to inboard jet.

The motor is a GM made Ecotec supercharged in line 4 cyl 2.4L. Mostly stock Except some EFI, exhaust, and cooling components. 240HP. And the super charger is off of a 2.2L Ecotec… the 2.4s didn’t come with them.The outboard that came off was 80HP. He had a custom boat(among other things ) welding shop that another buddy works at chop, channel the boat and build the motor and jet pump mounts in the boat. Then he’s done all the install, wiring, tuning(most of it) etc himself. There is a lot of custom stuff done with this motor, it’s a popular one to swap into things, but this is the only jet boat, and IIRC only boat of any kind in the world with one!I was out with him on Monday the 18th for the first ever in water running and tuning. We spent 9 hours on the water, only about 45 min running it. The rest of the time was chasing fuel supply issues, mostly mechanical, but also in tuning the computer control of the EFI.. I’ve learned an Epic amount of stuff that I didn’t know about how EFI systems work.There is a lot of his builds details posted on a couple forums;https://www.cobaltss.net/forums/2-4…5-supercharger-2272-mv-jet-boat-build-322969/http://www.meanchicken.net/webmain/forum/viewtopic.php?nomobile=1&f=69&t=19737Apparently jet boats are Really popular in NZ? A lot of the info hes using came from down there!http://www.nzjetboating.com/yabbse/index.php?topic=30216.0It just amazes me, the new motor and jet setup is only about 100lbs heavier than the old setup, if that much, he’s still only drafting 6″ under this thing,(on step it has to be 3″ or less!) With selling the outboard motor off it, he’s almost broke even, and gained 100+ HP ( 80 to 240, but ya lose some to the jet pump).
Unfortunately I lot all my video and pics from that day except one shot; Yeah, the scenery is pretty epic too! 🙂

That lake is unique in the area, and relatively new, only been there a couple years. It’s only about 1/2 mile,  maybe a touch more across the London way, 1/4 the other way I’d guess… BUT  It’s within 2 minutes of the industrial part of town, and 5 minutes from metro/downtown,  a 10 min max from just about anywhere in Fairbanks.

It’s Deep, has a great launch and floating dock, picnic areas, bathroom facilities,  and allows power boats. That last one is the big thing… Otherwise it’s a 1.5 to 2 hour drive to a lake that allows powered craft. Otherwise it’s the rivers… But playing in a current can get old, and these are shallow water rivers… Can be less than fun at times.

It’s perfect for this project, as shallows and a current could be killer for testing a new motor!

As a bonus, this lake does outlet into the Tanana river, so it has options.  And fish.. 😉
So, onto the next time we were our with it, last Saturday; 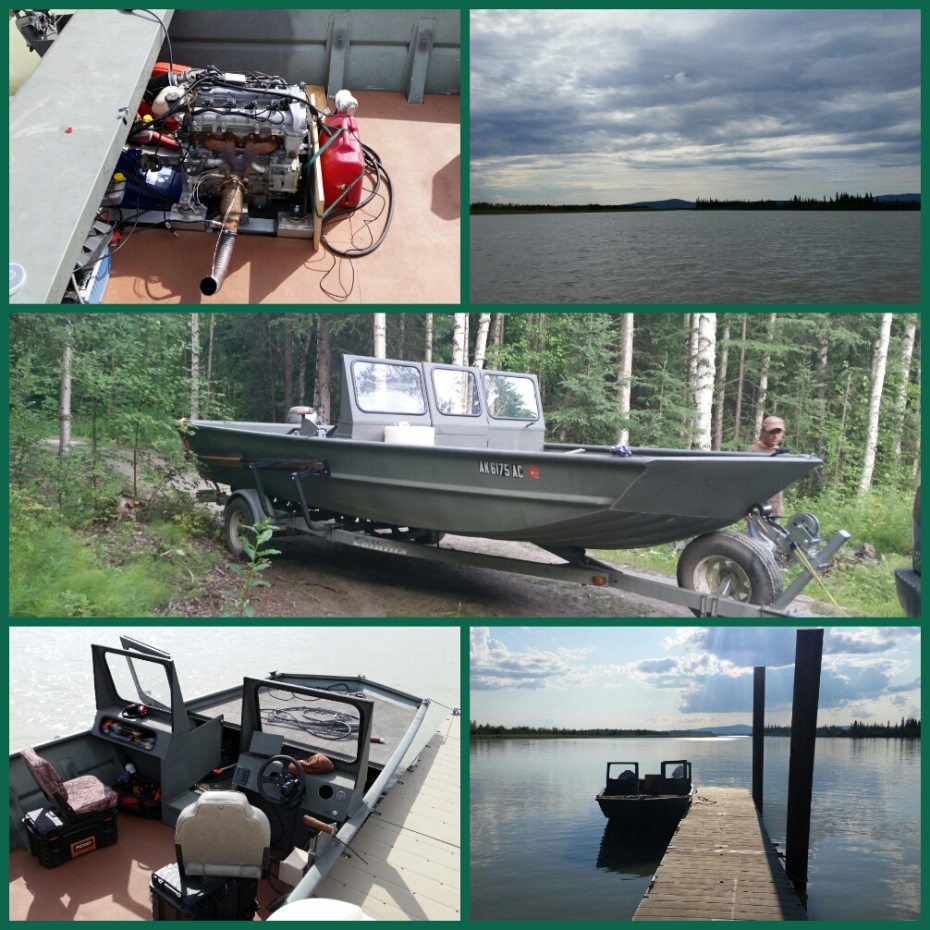 Junk yard GM ecotec 2.4L with a supercharger from a 2.2L. Full custom setup for fuel delivery and injectors( the only GM part left is the rail itself). The jet pump unit is top of the line made by Scott.

Our day out the first time that Monday, 9 hours on the water, 45 min run time mixed with problems…. But it did run all the time… or would run for short times.This last time out on Saturday, boat was in the water 6 house before we got it to run at all… uhuh. First 3 hours it would fire over but not stay running. We were trying to run it without an O2 sensor (which technically it should do!) since the machinist that’s making the O2 adapter for the marine water jacketed exhaust had the sensor. No go. We had his spare sensor, but different plug/wire harness and colors. Tried unsuccessfully to hot wire it in. Drove the 40 miles(1.5 hours) round trip and picked up the right O2 sensor. Installed. Then it wouldn’t even fire! Checked and found no spark. Serriously turning into a rough day at this point. After over an hour of checking everything, I found a main fuse blown. We’d shorted out something and blown power to the whole setup when hot wiring the first O2 sensor! Oops!!Them it ran great! Other than a hick up or two at about 3200 rpm, where it would stall out, and if you pushed it, the compute would kill the electronic throttle… We found out later that the tuning/computer fuel tables transition at that point to a higher rpm/load setup, but it not set right and it leans out too far– enough to cook the motor fast– computer was doing right to protect the motor when it was cutting off. So that will need chased in the programing, to richen up that tables’ mixture curve. For the rest of our testing we kept it below 3K without a hitch.Its a non issue for general run though. We hit 50% throttle and 25 to 30 mph at 2800 rpm or below depending on load in the boat. And there is the big point; load in the boat. First run with around 900 pounds in the boat and it went “on step” within a boat length, and ran like it was empty! So we bumped up to all we had.Two 50 gallon drums, two 20 gallon drums all full of water, my friend and I, and we had 1800 pounds in the boat. With the full 1800 in it, it took maybe 40 feet to get on step, then ran 40% throttle to 25 mph, at around 3000 rpm, ran fantastic, circle after circle in the lake, without a hitch. Never bogged, never pulled bad… was almost like an empty boat!!

Technically, the hull itself is only rated at about 1800 pounds, so add in motor, jet pump, and gear weight etc, we were a good 500 pounds over that. Ha! So the most weight you could ever safely have in there, and more than you’d ever really need to, and it ran basically like the loaf just wasn’t there.100% success to the project! (A single 66″ moose, 2 guys and their gear last fall with the 115 hp outboard, he couldn’t get it on step, and they got back with less than 2 gallons of gas to spare. Almost didn’t get back, basically!) The point wasn’t a speed demon, but a super weight hauler for hunting. I think he’s got it.

A bonus too, on about the third loop around at constant rpm/speed, the fuel ratio suddenly improved by dropping on air percentage.. anything over 15% is bad, and 17ish on up will cook the motor. We were running between 14 and 14.7 to start, at cruise speed. OK but not great. It suddenly dropped to 12.5. The computer is learning what it can do, and what the motor needs, and is tuning itself. At this point, the more it runs, the better it should run the mixtures as it continues to learn. Shouldn’t have to worry about it as much. Anyway, our last two runs of the day, part one and two from in the boat. And part three from the launch, while we waited for some kids to get out of the way of loading on the trailer.

Slight hitch at the end of this next one… lol.

Sorry you don’t get to see me.. (lucky you actually! ) we started out both filming, but he ran out of hands between throttle, steering wheel, and phone… lol.

So, anyway, this has really been a lot of fun for me, I’m super grateful he’s included me, and allowed me to be a part of helping with this.

As you all know, I Really enjoy custom work, things out of the ordinary. Along with my automotive interests, growing interest in boats, and absolute (if probably a bit weird)love of troubleshooting, improvising  and chasing a problem,  I really am loving this project.
As I type this, he is mounting the marine water jacket exhaust(last few days anyway), and custom O2 sensor mount. Be interesting to see how, or if, that changes the run of the motor.

All things stay good, and God willing, on the 3rd of August this boat is one of three going on a church group fishing/camping trip. 3 days in Minto Flats, one of the biggest and most remote norther pike hot spots in the state.  Yes, I’m going! 😉 😀

One thought on “motor boating!”