So, the mounting holes on the winch are 4″ on center…. Yeah. My bigass huge piece of angle iron I was gonna use ain’t big enough.

Dug around and came up with a piece of square tube wide enough to cut wider angle iron from.

Fits the frame perfect too, and I mean PERFECT, it’s 1/4″ shorter than the opening is wide, and 1/8″ for height and depth. Minimal cutting required!  Bonus, it’s 1/4″ stock instead of 3/8″, making cutting and drilling I do need Much nicer.

Honestly it’ll be fine, the factory supplied install bolts for the winch itself are grade 5 or lighter, and 5/16″. And there are only two of those…

So. The design kept evolving as I went… got simpler in some ways, but more complex in others.

I was going to cut the square tube down to an  L angle, and stick with the initial style  I’d designed.

But,  then I figured I could cut it to an uneven U , the winch on the back taller arm, and bolt the fair lead(roller cable guide) on the front shorter one, saving me from having to fabricate another mount bracket for the fair lead.

And further, that when in place, the top front corner would hit the bumper cross bars back side… So if it did torque foreward, that would stop it, and stop it from twisting on the mount bolts.

But… Then that meant I’d have to, do all the layout and alignment, drilling, setup on one piece, at once… making layout being more precise, more important. It also meant cutting a feed hole for the cable in the tube wall. 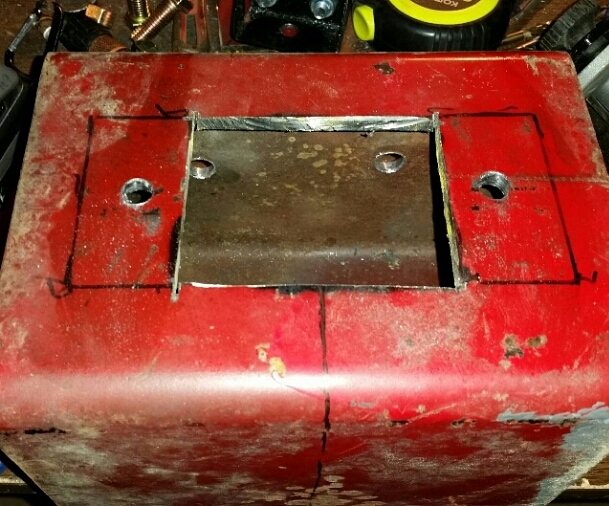 Which is what you see here. 😉 Actually turned out not to be as bad to cut as I thought it’d be.

And, there it is. Drill 6 holes, two bottom for mounting,  two rear for the winch inside, and two front for the fair lead, plus the big hole cut for the cable.

At this point, I got tired of working bent over, and squatting… Dug out some wheel ramps, that coupled with the driveway being 8″ higher than the shop floor, got the whole wheeler up where I could save my back and legs some wear. 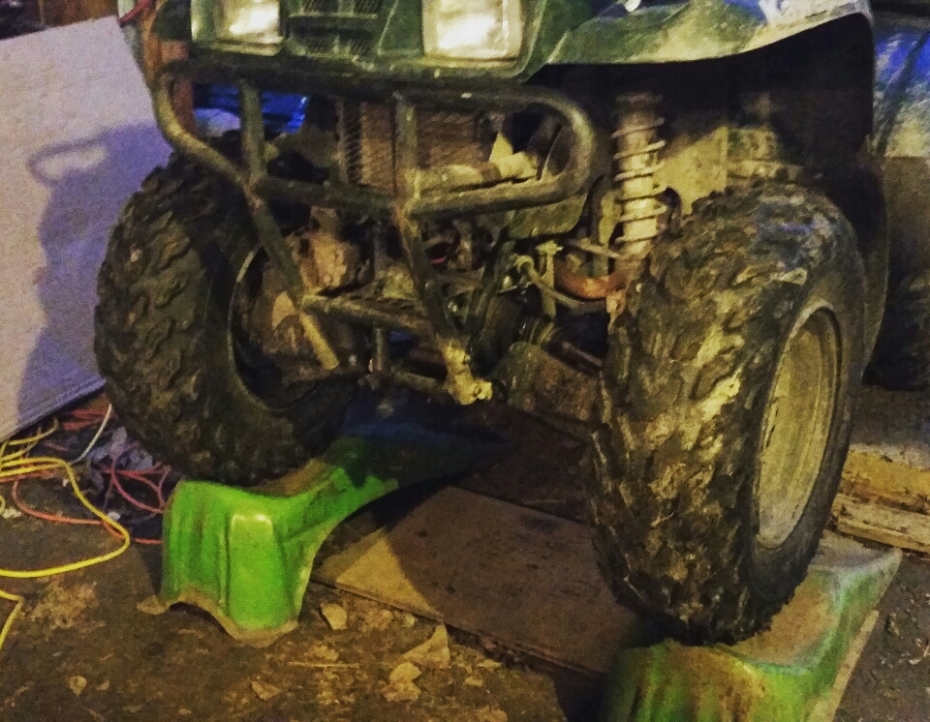 And assemble. THAT was a pain, getting at the inner end of the winch mount bolts inside the tube.  Found out I didn’t leave enough room, the heads of the mount to frame bolts won’t fit under the winch.. :(😒

And realized that to get it mounted in the frame, even If the bolts fit, I’ll have to do the winch install IN position in the frame….

Thought I’d do it half assembled and put it in the frame… Nope! Won’t fit through the frame/bumper with the winch in the tube. :?😥😩

Took the bolts to the grinder and made the heads half as thick. Probably only grade 7 bolts now ;)😜.

Over an hour later, of fit, re fit, etc later, it’s in and all hooked up! Had to install the cable to the motor… but couldn’t spool it on without the motor mounted, so I did the install with the cable hanging loose. Got the cable into the spool mount hole, crimped the wire nut… THEN realized that the cable needed to go through the tube side hole and fair lead.  Oh, yeah… cable go out the front. Right. I knew that.. 😒 😉

I finished the install, actually twice, because I pinched the cable behind the lowest mount bolt the first time… (probably what I get for not quitting at midnight… long days tend to breed little mistakes in groups at the end..)

Then fed all 50′ of cable up through the tube end and out the front… through the fair lead without one of its rollers so the hook would fit. 😆 (think outside the box!)

Gotta say, I was real glad I had it up on ramps for that… I did it sitting on the ground under the nose/axle etc, which wasn’t real comfortable,  but it put the winch etc at chest/face level and easy to see/reach most of it.

And, it’s all in!  😎
Now, I was going to test fit everything,  take it back out and paint it, then reinstall… But even without all the little complications,  it really is a pain in the butt to get in there… Not happening now!

I might.. MIGHT,  mask off the oil cooler behind it and the winch motor, and paint it in place later. Maybe.

A couple details.
With the wheels turned all the way to the left, it looks like the tire will hit the motor… It won’t. Got a couple inches clearance.

And, it also looks like I covered part of the oil cooler, but it just covers the lower 1/2″ of the mounts and mesh for it… the cooler itself is even with the top of the tube,  or only about 1/8″ lower.