A simple item you’d say… It is. Verry simple. A rounded headed bolt with a cross hole. Very simple.

Until you decide you can machine one of your own.

The back story being, that I’ve been cleaning up an old rifle, a Marlin model 39A .22. Its old and worn, rusty and rough. And is a tack driver in accuracy, fantastic to shoot, a great vintage piece made in 1952.

The plan has bee a grouse hunting excursion with a friend, hiking through the back country.. So the gun would need to be slung to carry. One hitch being that in its 64 years of life, its never had a sling on it, becasue there were no studs on it. (OK, maybe it had a barrel band stud at one time, and one in the original butt stock, but not having them now, I have no way of knowing).

So, where Marlin now puts that stud on the new rifles(yes, these are still in production, the same basic design is THE longest running .22 rifle design still in production, dating back to the original design in 1897!), is on the bottom of the foreend stock cap. A new replacement part for a new rifle is about $25+shipping.

I figured I can drill and tap the cap I have, and add a off the shelf stud. Probably about $5 to $7 for a stud set.

Sure. But that takes a trip to town to do it, and the spare cash to do it, and honestly, its just a fancy headed bolt as I said above… And I have this shop full of tools, including a lathe, that excells at making shiny round metal objects…

SO, I set out to make a swivel stud for the rifle.

4 hours later I had one.

Removing the cap, and drilling it, then tapping it was easy. The drill wondered a little(I need to get a set of bits with those fancy 35deg split points that don’t wander!), but its OK, the rifle is far from perfect anyway.

(Yes, this rifle has some rust issues… a LOT of them… I’ll be giving it a good cleaning soon.)

I chose a 10–32 thread and bolt size.  In the space I had available in the cap, and of the newest sharpest taps I have, it was either 8 or 10 size, and I figured to lathe cut the threads, but if I had to, I had sharp dies in those sizes. Or so I thought. More on that in a minute. I went with the 10, for the largest to support the rifle weight, and 32, a fine thread, to get as many threads as possible in the ~approx 3/16” cap wall thickness. I also happened to have a verry sharp 4 flute tap in that threadto use ;).

Pulled all my measurements from cross reff, and off the cap etc, made sure I had all my info…   Double checked my tools.

A standard stud off another rifle measured 3/8” diameter on the “head”, a little narrower on the two flat sides that the cross hole connects. Perfect! I could start with a 3/8” bolt shank and save some machining down to size.

So, dug a bolt out of the bin and went to it. It took about an hour to cut the head off, true the outer dia, mark intervals for stud length, head length, thread area etc, then turn down the thread area to the propper dia to cut the threads, pre bevel the tom of the “head” for later rounding, and I was ready to thread it.

Unfortunetally, I got into it at this point and forgot to take machining pics. Sorry! 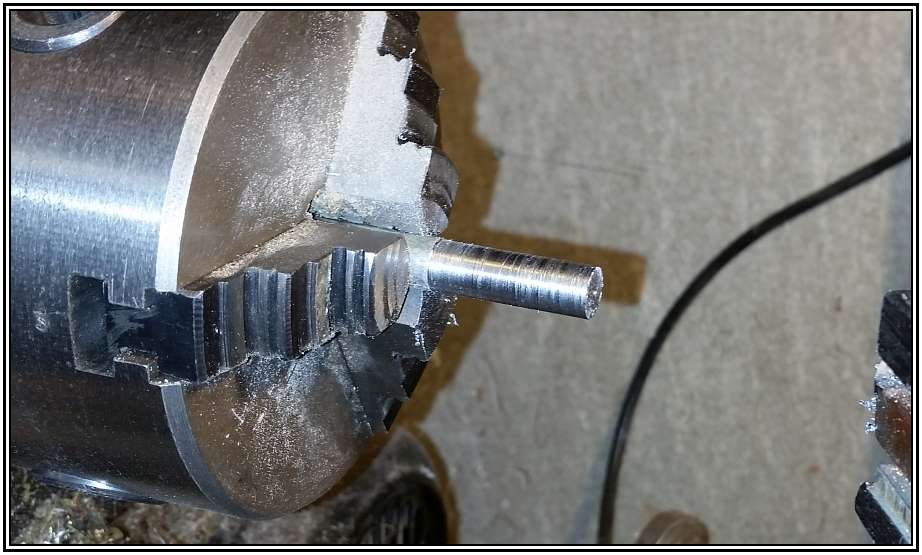 Got ready to set the lathe gears for the threading process and realized that this sucker won’t cut 32tpi..(which is WEIRD, since 32 tpi is a really, really common machine screw thread!)

OK, well, I did make sure I had a die for hand threading when I started, I’ll do it that way.

Re-checked and double, triple checked all my measurements, the die etc. Made sure I was using the over sized starting side of the die.

Put the thing back in the lathe and cut a hard taper on the tip.

Oiled the ever loving hell out of it.

I was actually already 0.005” under spec, but I took a little more off, in increments til the die would barely start.  It was Hard to thread. Got done, and cleaned everything.

Cranked it into the cap. REALLY loose! ANd then it bottomed, and just a light turn stripped the top 3 or 4 threads on the stud.

GAHHH!  I’d cut it too small, to get it to thread, and the threads were not engaging deep enough. OK. I had a process down at least. So, I took another hour and did it all again.

And yes, I forgot to take any pics this time around too.

That way, if I took too muck off again, or otherwise messed up, I could cut it down, and not have to do All the machining down from the full 3/8” dia again.

I finally got the die to start, on a beveled end, on a good diameter. Slowly, carefully cut the threads down till it stopped at the dia increase. Put it back in the lathe, that was left at its last setting, and took the rest of the length to the head down to that dia.  Unfortunetally, the bolt not being perfect, nor the lathe, I was slightly out of alignment having taken the item out of the chuck and replaced it… so it took a touch off the top of the threads I cut at the same time. Grr.

Anyway, cut the rest of the threads on down to the head, checked the fit in the cap and it was nice and tight! GREAT!

Re chucked in the lathe, and cut to the lenghth I needed, then cleaned the end threads again. Perfect. 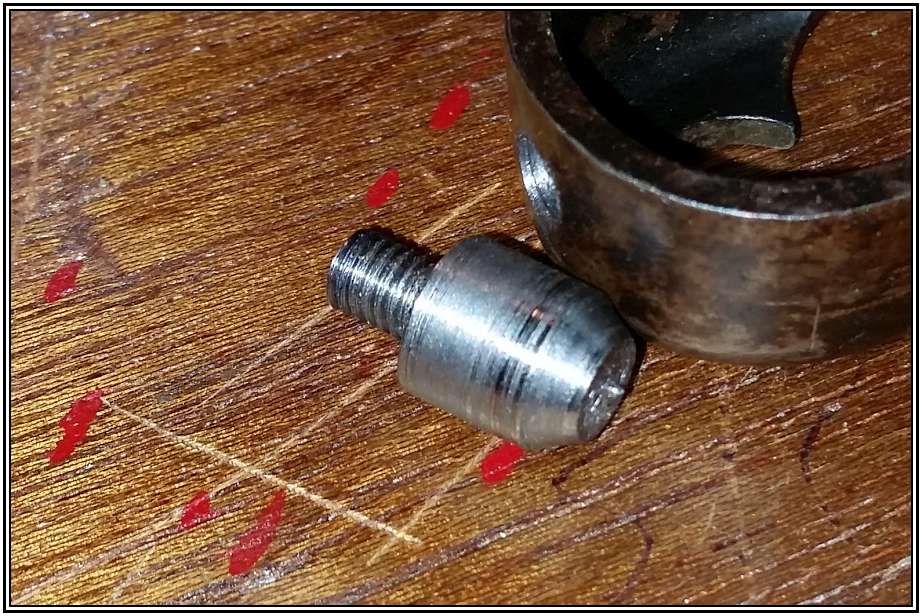 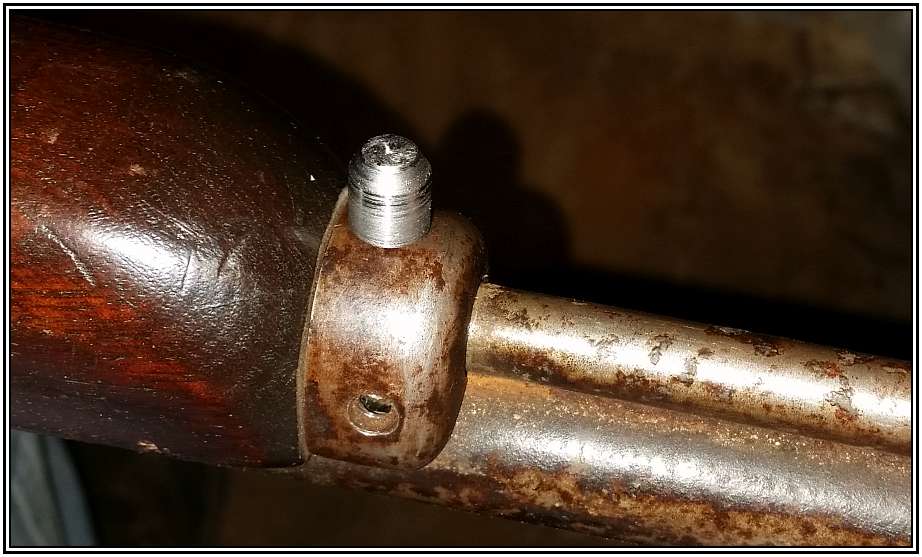 Cranked it down tight in the cap so I’d have a handle to hold/clamp, and put it to the grinder, and flattened the two left and right sides.  Over to the dril press, sellect a appropriate drill to match the cross pin on a sling swivel, and drill across.  Drill went half way and stopped.. Harder core to the both than the outer dia. SLightly smaller higher quality bit punched all the way through, and then opened up with a bigger bit.

Meh. Gone this far, and the cap hole was off center anyway, and as I said none of the rifle is perfectly clean… It’ll work.

Re-installed it in the cap, and tightened it…. Hole/flats come out the wrong angle. AAAAHHHH!!!

Go ahead and laugh. It is hillarious at this point, although at the time I could have Killed the inventor of the sling stud, or anything or anyone else dumb enough to get near me… 😉

So, it was a combo of it not being as tight as I though it was the first time when I cut the flats, and also I now believe in hindsight, of it starting to strip the threads…  I backed it out to where it was lined up right, and it was a slight gap, found a couple lock washers the right diameter, and used them as spacers, tightened it down and it was perfect.

Took it apart, got out the locktite, and reassembled it. TIghtened it down.

And the little bugger stripped the top threads again!!!

No, I didn’t pitch it accross the shop, but it was awfully tempting!!

It only stripped the top couple threads, the bottoms were fine, but I didn’t trust them to hold it, nor leave it free spinning, even though it took a lot of pressure outward to get it to catch and thread out..  It’d thread out while carrying on the trail.

I cheated. I went and dug around and got a nut the right size, and tightened it up on the inside(good thing I’d designed this to have some bolt sticking through the inside!!), and CAREFULLY torqued it down.

I finally won! But boy, oh boy was that a long hard battle!

After that I just had to put it to the sander and round the end radus so a swivel on it would, well, swivel. 😉 And then cut a clearance for the radius in the wood forestock end, and reassemble the rifle.

Like I said before, its not on there perfectly straight, but its not off far either. Its fine… I don’t care, at least its on there! 😉

Depending on how I refinish the rifle(IF I ever get that far… lol) I’ll buff/plish the stud and match it. For now, I’ll hit it with a little bit of cold blueing to take the shine off and call it good.

Now, the interesting part is… I have to do this all over, again. Most of it anyway; You need two of these studs on a gun to use a sling.  And at this point, where I have decided that its a simple item to make, and its not worth buying, and have then made one, I am naturally commited to make the second, on principal alone. (damn it!)

Yes, I could cry at this point.

BUT, one redeaming point here, is that it will be a wood screw shank, and it doesn’t have to mate to anything I will tap threads in! I can cut whatever course deep thread I want to with the lathe, making a wood screw/lag bolt shank, taper the point, pilot drill the stock, and install… no matting of two threaded parts, and no matching of threads; verry importantly, NO HAND CUTTING THREADS!!

Should be a LOT easier compared to this Adventure!

And, I end with Two items for my shopping list; A new die for 10–32 threads, since I believe a lot of my trouble was probably this one being duller than dish water… And a set of bits with the no-wander, easy start, split point. At least a few in some common sizes; I can drill undersize holes close to the size I need, and once they are there and straight, its easy to enlarge them with almost any bit.

One thought on “A sling swivel stud.”