No, Case has never made one… As far as I know anyway.

And btw, for those that don’t know the term, a friction folder is a folding knife with no back spring, no lock etc. Its just the friction of the blade in the two handle halves that keep it closed, or open. Like a traditional straight razor in construction, although those tend to have verry little if any friction to them.

Here a few weeks back a freind sent me some knives, one he wanted me to have, and some others he called junk, for parts. Its one of those junkers, which I have taken apart and tried to save. 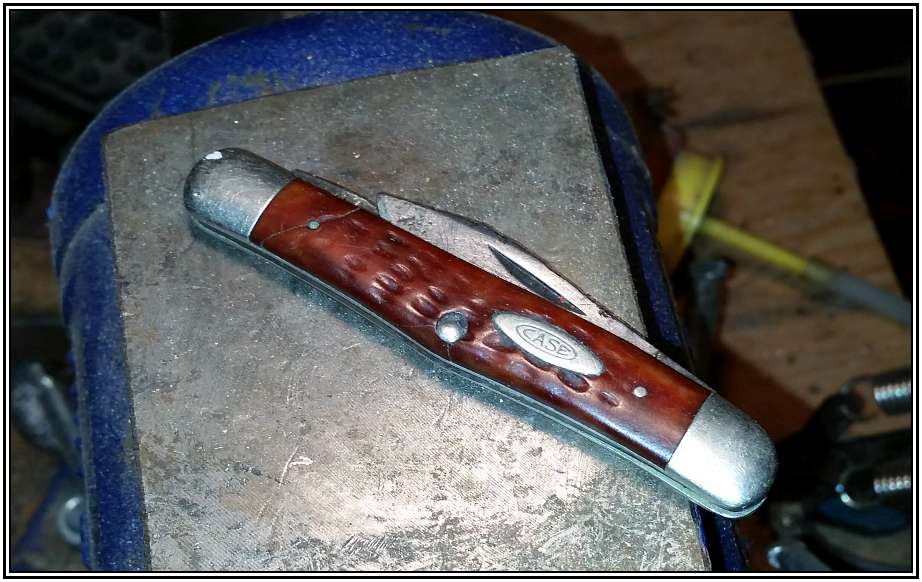 Details on its arrival, and evalualtion are here;

The main blade has No snap. It swings free, barely engaging the spring.

But if you close it and close further, pressing the kick into the spring, it cams the spring out, against good spring action… so its not the spring worn out/sprung. Its like the spring is sprung away from the blade.. BUT both the spring and blade are sunk too far into the back of the frame, not raised out of it at the spring back like it would be with a sprung spring…

And also the secondary blade was broken off, about 1/4” frm the tang, too short to do anything with, and too short to even re-grind into anything.

So, I took it apart, this is done with a hammer and a razer blade, to sheer the pins, and just the pivot pins this time, not the center pin, for one main reason; to not have to re-fit a new pin into the already cracked and fragile bone. I figured I could tweak the spring if I needed to with it in the frame halves, and do any assembly/disassembly easier this way. 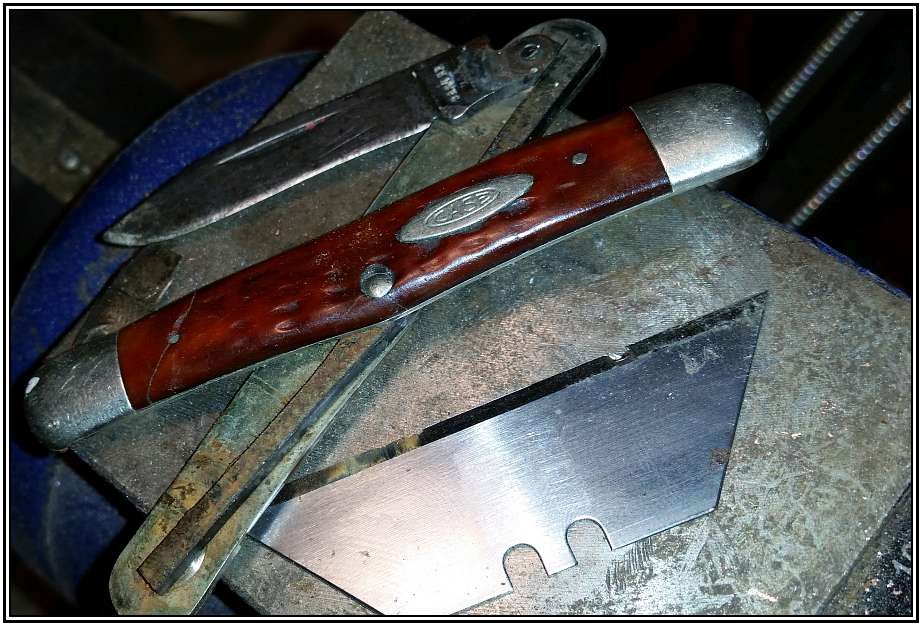 Now, the first thing to do, was re seat and peen one of the handle scale pins, that was protruding into the inside of the knife frame liners/blade area. I drove it back and peened on the inside, the peened the outside to the bone. 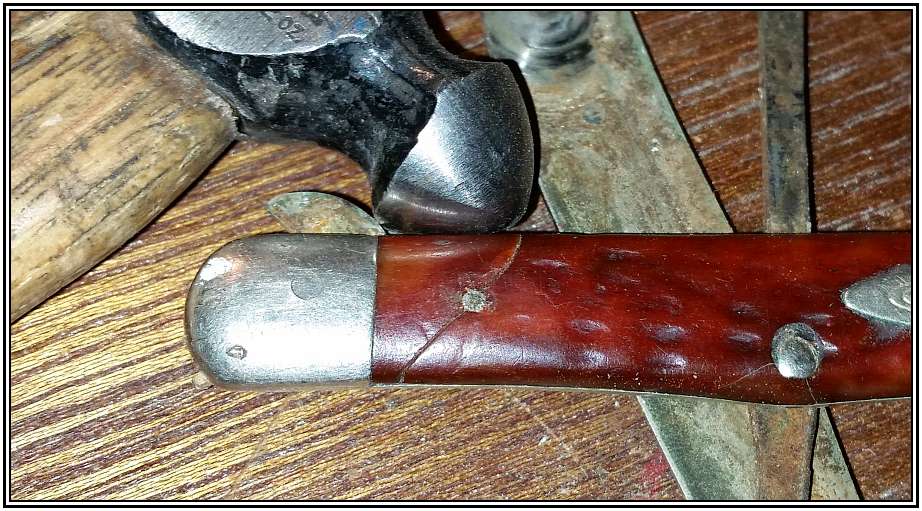 Next, was to figure out what was wrong with the blade action, for the main blade. That was easy;

The tang has worn a offset into itself, and a matching dimple in the spring.. How?  I can’t be sure, but my guess is that the knife was spring sideways at some point, giving it some play… Then, because of the back blade being thinner, and having a spacer next to it, the frame being spread and twisted, there would be a gap along the spring on one side at that blades end… repeated opening and closing, would gaul the blade and spring and grind/wear it down.. The further it went, the more of the thin side of the tang would wedge on the Side of the spring, and continue to hold the sprung frame.. Now, technically the blade tang should be the harder steel, and it should eat the spring first… ANd that much wear would take YEARS to do.. So applicable it makes no sense, but then I do have the parts, and thats the only explaination I can think of..

Anyway, I re-ground the tang to the smaller radius, re installed.   I also found the spring to be pretty much identical from end to end, except for the gauling. So I swapped the blades in the ends of the knife frame, to give the main blade the fresh spring end.

I then made new pins, for reassembly, and fitting. But they’re being an odd size meant custom turning them. The 3/32” stock was smaller than my lathe would grip, so I improvised, colleted them in my Craftsman flex shaft on the Dremel, and run the opposite direction as the sander, ran them against the running sander. Test fit to the knife every so far, till they were perfect; 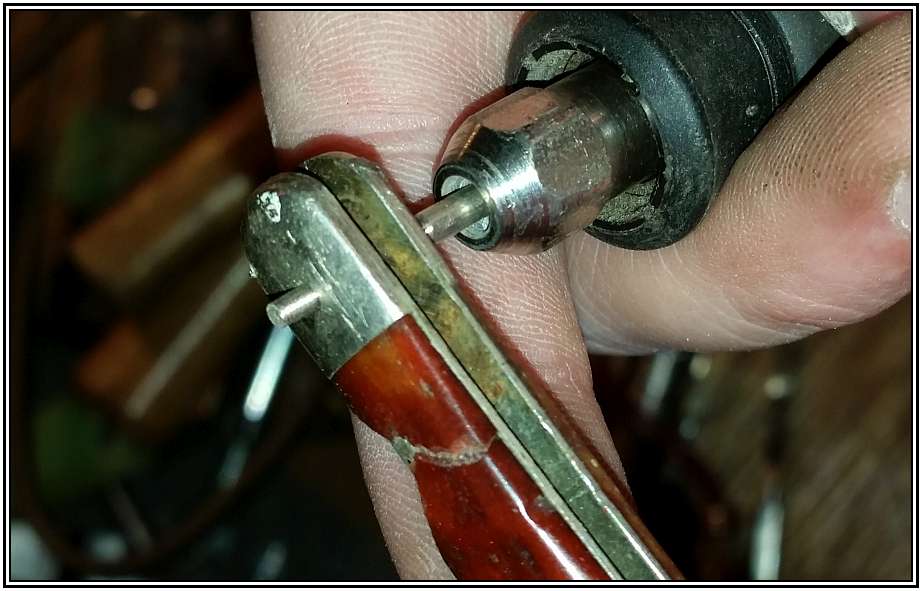 I then decided the small blade was a lost cause, but needing it installed to provide spring tension, I simple permanently re-installed it, and its spacer for thickness, pinned it Tight, and ground it to match the end of the knife frame. 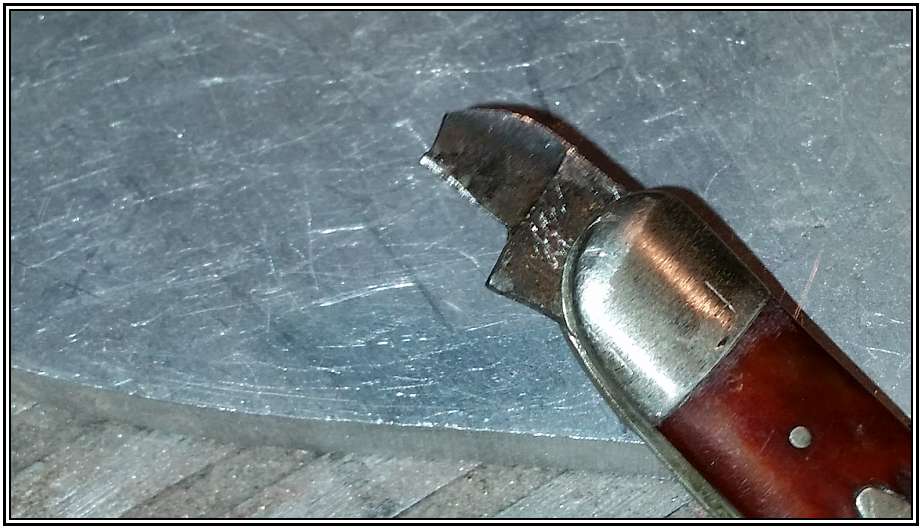 And ground to fit;

Then, for a while… Not sure but an hour at least, I did un numbered dissassembly and reassembly, while tweaking the spring, trying to get some tension and blade action/walk and talk. I did gain some, but not much, It now has a little tension open, and some closed… Not much though.

I ended up moving that end of the spring almost an 1/8” inward in the frame… Any further, and it would have passed the pivot hole, making blade and spring instalation impossible..

See, the spring has tension against the knife tang, and has to be compressed to install the blade, but because of where the metal is now gone from the End of the tang, there is nothing to cam the spring out when opening or closing… so thus there is no Added tension, and no spring action let off of that tension; the normal snap open and closed.

The metal needed, for the geometry needed just isn’t there, no matter how tight I get the spring to the pivot area/top run and bottom kick of the blade. It would need metal added to the End of the tang, to then be fit to the tension.

I COULD weld up the tang, and re fit it, and re heat treat the blade… But thats a LOT of work, that this knife simply isn’t worth doing for, for me right now, anyway.

At that point, with what tension I had, I went ahead and cleaned it, and reassembled the main blade end.  Now, with moving the spring in so far, I now had a recess on the back of the knife, down into between the liners, to the spring.   Easy fix, I simply ground the back of the frame down to meet the spring, and re profiled/rounded the handle edges, and bolster end.

The blade ended up sitting great in the fmame when closed, tip Just below the liner edges… It was OK, but if the blade being only friction fit, ever creeped up a hair, it could be dangerous. SO I re ground the tip from a clip point to a drop point. Took that opertunity to re=sharpen it at the samder too. 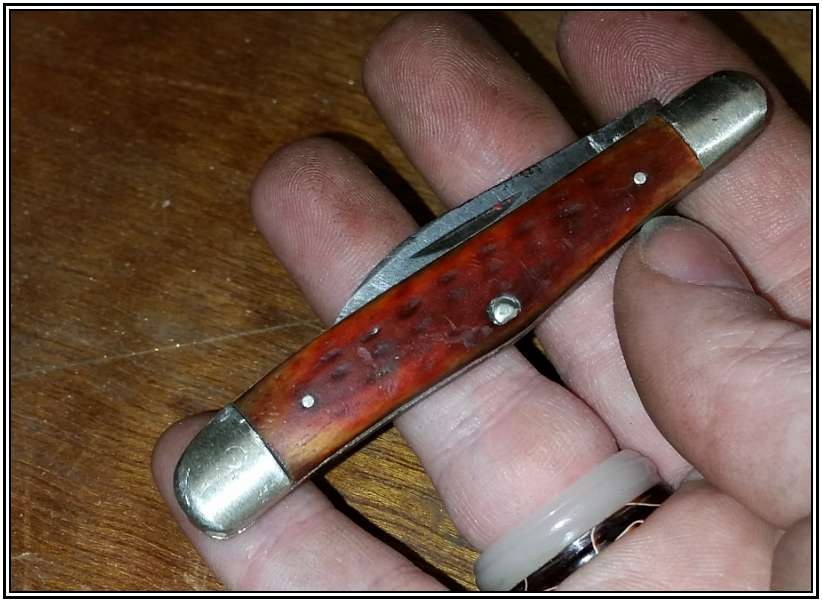 Now, in re fitting somewhere along the line, I broke out the cracked piece around that pin I re-set to start. So last, I re fit the piece I was lucky enough to not lose at the time, fit it into the hole, and glued the heck out of it.. Its not going anywhere, and actually blended quite well.

Unforyunetally though, the piece from around the center pin, when it came out I didn’t realize it till I crossed the shop to the bench again, and couldn’t find it after.

I THINK I can fill it in later, with some scraps of other bone I have, and a little dye to match it.. I THINK.  I’ll have to be in a really good, and darring mood to try it though..

Anyway, it leaves me with a slim, almost gunstock shaped, single blade knife. It has enough friction to stay shut in your pocket, and open for use, and like any friction folder, with care and proper use as a knife, it will be perfectly fine.

I sorta lost, sorta won this one, since I didn’t get the function I set out for, but Did improve it, and gained a working knife… Overall I’m happy though, it was fun and challenging, and I learned some things too. Dissassembly/assembly practice never hurts either! 😉

I Still haven’t fixed my buffer, but when I do(soon!) I’ll polish out the back spring to an even color, and finish blending the bolsters, clean up the blade a little.

But as for now, I’m simply gonna start pocketing and using it! 🙂 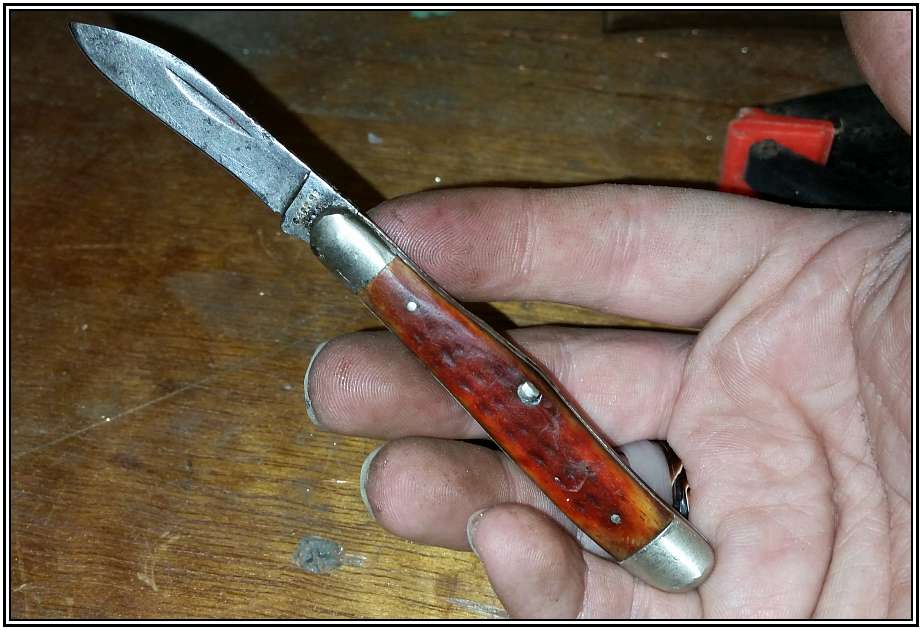 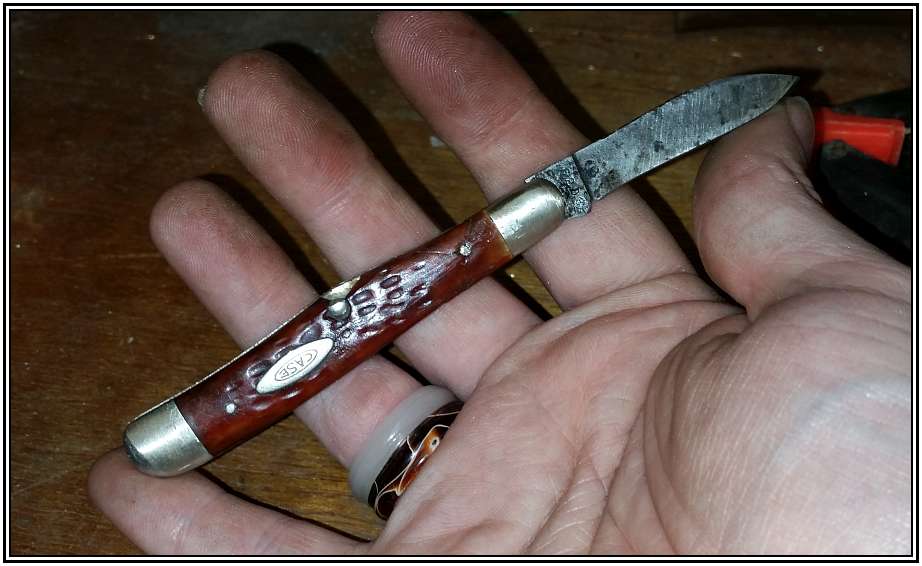 One thought on “A Case friction folder… (Case whittler rebuild)”