Update on some pocket knife projects.

Posted on January 6, 2016 by akadventurer

Little update on those beauties that my friend MTF sent me. Did some research on tang stamps.

I had thought the small pen blade might be pinched/jammed, but a dunk in my coffee this morning(pic in the previous post will explain that ;)) lubed it up nice 😀 . Its just rustier than the other blade.(still haven’t actually cleaned/lubed the knife.)

The Forest Master is also tang stamped Imperial, but will need a good careful de-rusting treatment before I can read it enough to date it. And honestly that tang looks pitted at that area, so I might not be able to read it even then. We will see. 🙂

the Hammer knives are a thin veneer of celuloid over a stamped metal “shell” handle side, which includes the bolsters and handle area.. I need rid of the celuloid obviously, but to do so, will leave me a plain metal handle. I know I can’t veneer it in anything else, but to cut it to make space for regular handle slabs will I think ruin the bolster areas… meaning I’ll have to make bolsters(UGH.) Unless I “shadow” pattern it with wood or bone(etc) straight across. Thats easy to do, been there, done that, but honestly thats a look I’m not too fond of.

All the Hammer needs for tool work is the kick adjusted, or the main blade re-tipped to drop it below the liner when closed, otherwise its in good operating shape.

The Forest master on the other hand is also celuloid I think, because of the shrinkage of the handle slabs, and they are nice thick slabs that I could replace… But its been abused too, and the bolsters are really worn and tweaked; to fit new slabs will need new bolsters. All this one really needs for tool work is a new main blade… its been ground down with use to more of a long thin awl, and there is No way I can get the tip down below the liner… It also has Epic blade play, not side to side, or up down, but ENDWISE (??) when open!

Batting 100 (sarcasm!)here so far on re-handling these two..
I’ll think of something though. 😀 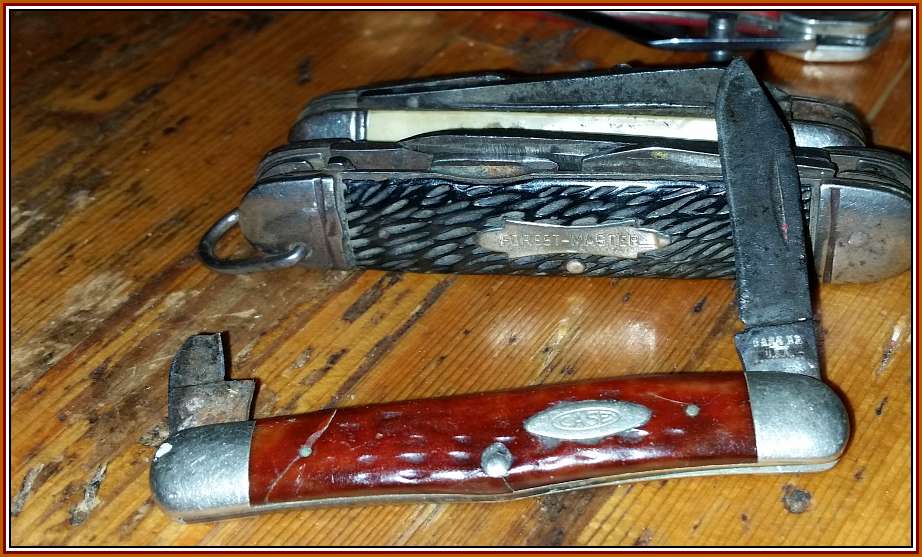 And this sucker has me stumped as to whats wrong with it… Or, actually I know whats wrong, I’m just a bit confused as to why, or how it got this way. The main blade has No snap. It swings free, barely engaging the spring.

But if you close it and close further, pressing the kick into the spring, it cams the spring out, against good spring action… so its not the spring worn out/sprung. Its like the spring is sprung away from the blade.. BUT both the spring and blade are sunk too far into the back of the frame, not raised out of it at the spring back like it would be with a sprung spring…

Its almost like the blade and spring have moved over from the back of the frame/liners. About half the hole/pivot diameter…. Can’t see how it could be moved over, but thats the effect I see.

OK its possible if the blade was removed and the tang re-fit smaller…
Thats do able, but still, WHY??

The blade is too short for the frame, so I assume broken tip and a regrind, but maybe a replacement blade? But if it is, it was a gGreat job, since the wear on the bolsters is so uniform to the rest of the knife… AND its the right blade/tang stamp pattern number for the frame(6208; bone handle, 2 blades, 08 pattern whittler, teo blades making it a half whittler), and still too short, so, a replacement and a re-grind? Two incidents in the knives life? Got me.

Also sorta kinda at a loss on how exactly to fix it. The kick needs adjusted to get the blade tip below the liners, OR the blade reground to a lower clip point tip or wharncliffe/sheepsfoot.

I am thinking that instead of trying to find a replacement blade for the other end, to simply re grind the one there down to the tang and hide it in the bolster contour. Or remove it and make a filler piece fit to the contour(since its a single spring knife, either way it needs something there to provide the spring tension for the main blade), making it a single blade knife.

Fixing the snap at the other end is easy if I can take the spring out and tweak the end inward/toward the blade to increase the tension. Am trying to figure if I can do it without taking it out of the frame/without removing the center pin, since the bone os cracked around the pin in a way that If I take it apart there, I will lose a chunk of bone, especially if I re-pien it on reassembly.

I THINK I can do it if I take out both blades, and let the frame/spring swing free, re-fit both blades, or the big blade and a spacer, then re-install them.

Its a lot of touchy work to do, but its just such gorgeous vintage red bone on a great pattern, I hate to scrap it!

3 thoughts on “Update on some pocket knife projects.”