Posted on December 4, 2015 by akadventurer

Lots of miscelanious projects yesterday, inside, outside, in the shop, some household fixit stuff, house wirring, auto work and wirring, wood cutting—new experiance there, running a chainsaw in pitch black dark with a headlamp for light. Worked great, just happened to realie I’ve never had to cut much in the dark.

Also, a side not, the new Husqie saw was great, haven;t touched it in weeks, first time I’ve ran it in the cold, 2F out and it fired on the second pull, iddled on the next. Perfect! Been a Looooonnnnnggg time since I’ve had a saw that will start and run at all, let alone easilly in the cold.

Anyway, got a lot of small projects done. Second evening in a row that I’ve worked on the small stuff and racked up 8 hours doing it… They say time flies when your having fun… It also flies when your busy and productive! 😉

Had mis placed my Knipex pliers wrench a while back, couldn’t find it all week when i wanted it.

As you can see, finding them was the Top item on the days to-do list;

(yes, I know my handwritting sucks. It works though. 😉 )

Gotta be THE greatest tool invention in a long time…  Its my go to for almost everything thats a nut or bolt. Wide capacity, smooth jaws, added grip the harder you push/pull, and the natural/easy ratcheting action you can get… Its the best mix of channel locks, crescent wrenches, and vice grips!  😎

I tend to mis place them a lot… I do sort of EDC them, but not everyday… SOme days they stay home, a lot of the time they live in the truck. When I do carry them they are always in the same pocket like everything else… Its just that the days I o carry them isn’t real consistent..

Its been suggested i need a dedicated sheath, or pocket for them for them.

I Hate sheaths. Only thing I Ever have in a sheath is my Vic Spirit, mainly out of shear habit after so many years with a multi in the Same Exact place All the time, I can’t get away from having a multi on my belt. All other sheaths drive me Nuts though.

It does get a dedicated pocket when I carry it. 🙂 Rear right pants pocket without a coat, and with a coat it gets a front left under my spare gloves.. Among other varied options depending on weather and the work. 😉

The problem is if I leave it with the rest of the non EDC tools after use, it can get misplaced in the shuffle.. OR, depending on where I load or unload tools between projects, or at days end, it gets mixed up there too..

Its Soposed to stay with my EDC gear, OR in the tools always in my truck… Usually it works that way.

Then there are the times where it is Exactly where its soposed to be, I just don’t know it;

I traced back my projects over the last 3 weeks, and figured out the last day i used it. Went through coats and snow gear I used that week, work tool bags, and tool/parts bins in the shop etc.    I then remembered cleaning out the truck cab in a hurry to make room for a passenger… Wasn’t with that stuff, but was close; It got stuffed in my “cab commander” somewhere along the way. I vaguely remember doing it so that it Wouldn’t get misplaced and I’d know exactly where it was at.. Ugh. 😉

Yes, my “cab commander” is a modified Tactical Vest. 😀 Built in MOLLE loops, pouches, with lots of velcro, and it naturally drapes over the bench seat. Works perfect! (and it was free too 😉 )

I have a couple pair of the Knipex Cobras too.  This small set, and a set a little bigger than the plier-wrench. 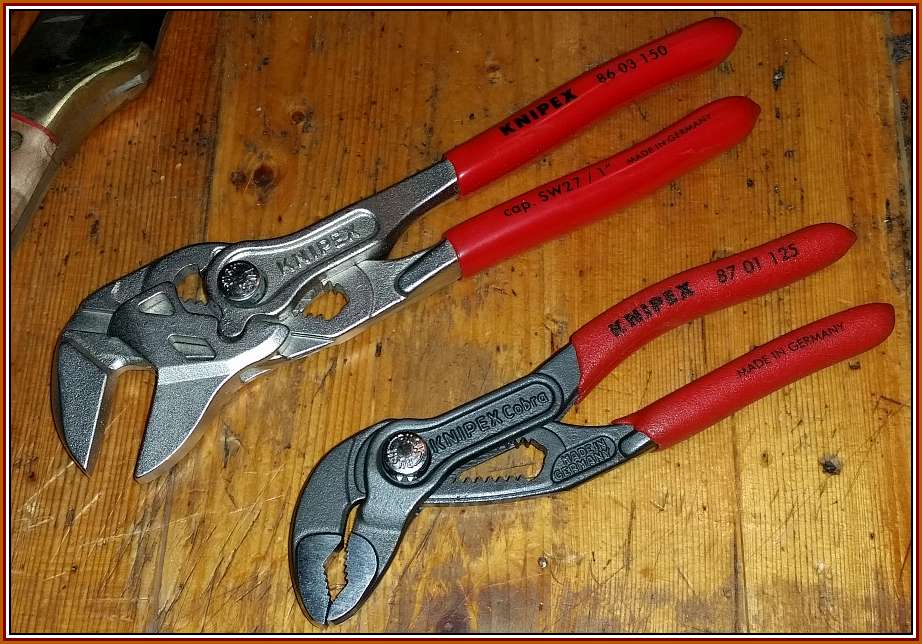 but I don’t really use them… the mini pair resides in the shop for easy gripping/prying work, but doesn’t get any “real” work. The other bigger pair is in my work tools—so its usually in my truck. They’re nice, but I avoid them since they’re rough jawed, and can damage and strip nuts and bolts work.

For stuff where I’m mainly gripping/leveraging though and don’t need to worry about damaging bolt heads, I go for the EDCed Vic Spirit first, and if that don’t do it then I go to vice grips and Big channel locks… The Cobras are the size that falls into the middle ground that I skip 99% of the time.      Great design, an improvemnt over regular channel locks in leaps and bounds… Just not real useful to me in the sizes I have.

In other news…  Making a cord longer was one project. Adding a plug to an item was another. Still only use my Peanut for wire stripping… Even with good wire cutters with stripping notches on hand within reach, I still just use the knife… Simpler, easier, and faster! 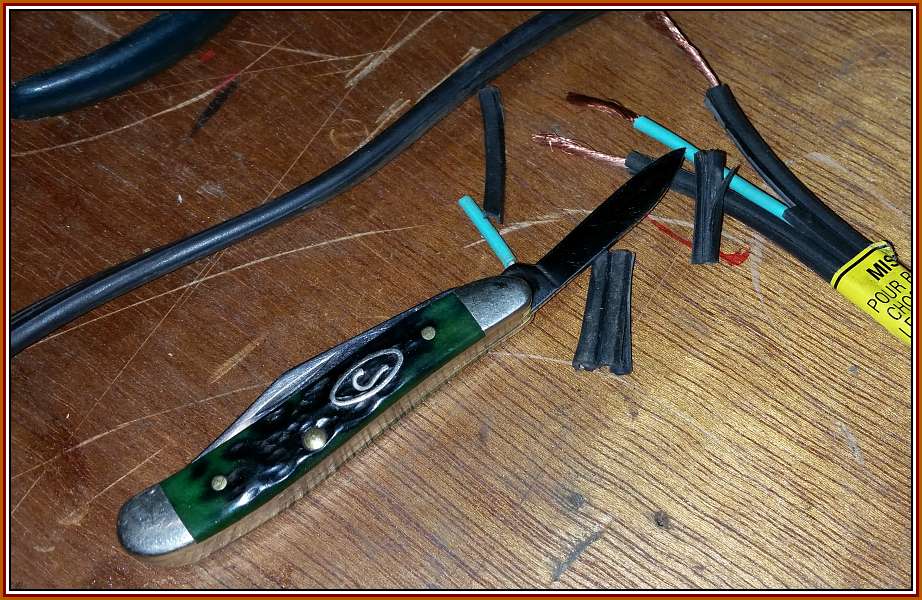 The Vic is a better terminal crimp tool that the electrical too I have too… lol. 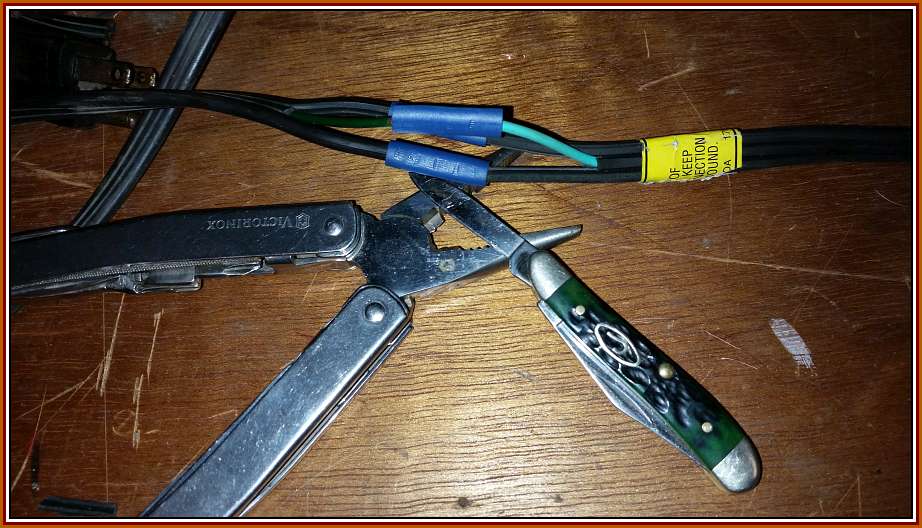 One thought on “Misc. Chores and tools…”