An old friend and I have parted company.

This old friend and I have parted ways in an agreeable fashion. 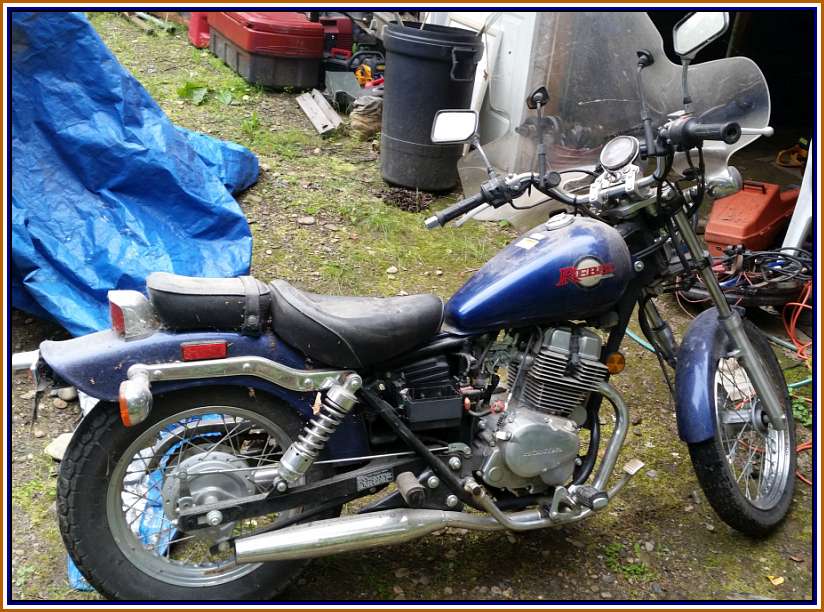 I got this bike brakd new, I dealer ordered it in the summer of 2000… I was 14, almost 15 at the time. First and only brand new vehicle I have ever owned.

For the first year and a half, I had the only one in the state like it, till someone else finally ordered another 2001 model.

A buddy and I did things to this bike that a motorcycle should never do, let alone a street bike…  Lots of fun, cool, and down right “Holy Crap, did we actually do that???!?!!” memories. Lots of great melories of ridding with my folks when they both had bikes, and could still ride too.

But, I haven’t licensed it for 5 years, and hadn’t rode it for 4 or 5 years… Even before Dad passed away, I was just ridding his bike the most, and its all I’ve rode since he passed. The 250 has been just sitting in storage since.

I decided at the start of the summer that it was time to pass it on to someone else that will use it… Then I forgot about selling it, and/or kept putting off listing it, not sure if I could part with it.

Then a couple days ago, a buddy, remembering that I had talked about selling it, or trying to trade it for a 4 wheeler sent me a CraigsList add… someone looking to sell a quad, or trade it for a dirt bike.

The Quad was exactly what I’ve been looking for(a mid size, slightly older, lighter weight model(dang all the new ones are so bloody Big and HEAVY) , anything but a Suzuki or Arctic Cat, Kawasaki prefered…with at least a 300cc motor, and 4×4 )

But I don’t have a dirt bike.

But my buddy asked the guy if he would be interested in a street bike. Yup.

So I sent pics, and after 3 days of trying to setup a time, last night I tradded my bike to him.

Its another 15 year old kid.  Makes it perfect really… I get to pass on my first street bike to another generation, his first street bike. That was just cool enough that I’m OK with parting with my Old Friend.    I mean, it was freaky, we set it all up by text message so I had no idea it was a kid(damn I feel old… when the heck did 15 or 16 become a “kid” from my point of view??!? )I was going to meet, and I was apprehensive about the whole deal and parting with My Bike…

And when two teens show up on wheelers, one of then the one I was trading for, it was like a trip back in time!

It was Exactly like it would have been if my buddy and I had gone to do a deal all those years ago… I mean, it was just… freaky… But Sweet too.  (Yes, I did talk to a parrent durring this deal and they were OK with the deal the kid was making.)

Now, ya might think, what kinda hell are a couple teens gonna put a bike like this through, even IF they get it licensed and ride it legal… I garantee, that bike has seen it ALL, legal and otherwise, there isn’t ANYTHING they could do to it that we didn’t do to it. Not Anything! And it survived it fine the first time… It’ll survive it this time too. Honda makes an EXTREMELY SOLID bike.

So, goodbye my friend, I’ll miss you, and always remember you. Safe travels, and keep yer shiny side up!

2 thoughts on “An old friend and I have parted company.”