Well, I got bored in the shop tonight, and figured why not…

Everybody thats looked at that axe handle I did has complained about the gaps, and that i should have set it down further onto the shoulder… Not that I particularly care what anyone else says, but then again I’ll admit to not really knowing much about what I’m doing with axes… So, I ran out of other stuff to do tonight, so I figured “Meh, why the hell not?”

The trick was getting the damn thing apart again! (without ruining the handle)

Took a hell of a lot to get it off! It wouldn’t budge either direction even pounding at it with a hammer, and a few other tricks. (knew it wouldn’t as tight as I wedged it, and having drove it on with a hammer to begin with… 😉 ) So I went at the end with a hammer and chisel, cut out about 1/4″ deep around the metal wedges to pull them… Ended up about 3/8″ deep before I could pull them with vise grips.

I only smashed my fingers with the hammer twice, and cut my hand on the razor sharp axe head once.

I finally went out to the wood pile and drove it hard into a chunck of birch leaving the handle horizontal, stood one foot on the log and worked the handle up and down with my body weight to loosen it up. Alternating that and driving at it with a 2.5lb. baby sledge one side then the other, while holding the handle vertical with the other hand, it finally came off.

The shoulder on the handle was actually narrower than the eye(the long way), even all the way down at its widest point.  I figured, “Meh, what the hell, I’ll set it down as far as I’m comfortable with while still leaving a shoulder in both directions”

And thats what I did.

Worked it down till it wedged and gouged the handle, took it apart, and took off the high spots, And repeat. Worked the shoulder back on the wide flats slow and careful all the way down, keeping a taper to the shoulder. Didn’t work the edges down, keeping it as wide as possible the long way…

But I think it is better.
It is filled out a lot more both top and bottom, but not fully on the bottom… I’ll add some wedging in those holes driven in from the bottom later. I could have went down further, but not enough to fill all of the eye, the wood simply isn’t there to do it, so I stopped here where I was comfortable with leaving some shoulder at all. 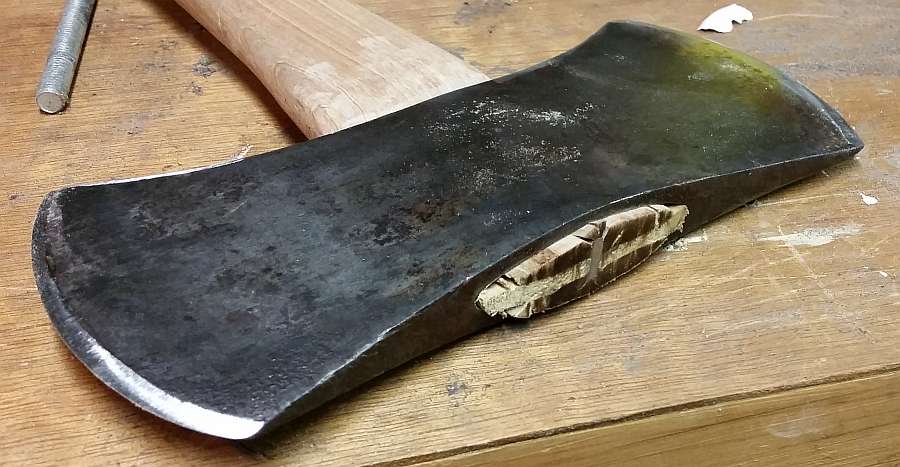