Those that know me well, or have been reading here for a while will already know that I Hate belt sheaths. I like the concept, but have never been able to get along with them very well. Holsters, fixed blade sheaths, and folder sheaths, and tool sheaths, all of them. To be useful they must be secure to the belt, not sliding around a lot, and on loops not clips so as to not come off and be lost.

But anything that can’t be moved or removed from the belt easily is a literal pain in the side… or back. Or wherever you are wearing it. They get caught in open chairs, and bang in tight doorways, and Anywhere you need to lay down, under and inside cars, in crawl spaces, you will 9 out of 10 times end up laying on it. Painfully.

They also get caught on things in crawl spaces, and under vehicles. A lot of this is work and profession specific to Me,  I do understand that… But I’m the one we’re talking about 😉  I don’t mind anyone esle using them, and more power to you if you can…

Having said all of that, I have found Two instances where it is working out great for me to wear a belt sheath.

One is for my Vic Spirit.  I actually started carrying it like this about 4 years ago on a job where I needed easy access to it, but it to be secure, as opposed to all my previous multi carry, loose in a back pocket.

I realized that being left handed(mostly) I tend to be on my left side if laying or shimmying around in a tight area, or working under things. So if I put the sheath on my right side, at about 5 o’clock, its out of the way, and even when I am on that side, it is behind the area I lay on and OK 90% of the time.

I still didn’t like it, it still had issues, and after the job ended(about 5 months) I went back to pocket carry for the most part. As soon as I changed to another tool that had a clip, I changed to pocket clipped carry and never looked back.  — Errm, I take that back. I did try sheath carry for my Custom Wave about a year later when I got a Skinth(the so called skinny sheath), but even that didn;t work out for me, and I went back to pocket clipped carry.

My prefered multitool for the last few years has been the Leatherman Wingman. And it having a great clip, I simple clipped it dirrectly to my belt… Sheath problem was solved; With no sheath, the tool could be moved, removed and repositioned endlessly for any activity I was doing.  But since having lost it this spring(yes, probably, ironically, because of my carry method for it…) I have been carrying my Vic again.

Had to do something since the Spirit is heavy, bulky and cumbersome in a pocket, and does not come with a pocket/belt clip. (HEY Victorinox!! Get with the program already!!!)

Needed a easy way to carry it out of a pocket.

So, much to my surprise again, I have been wearing it like before, at 5 o’clock, on my right side, with little to no issues.

Yes, you might look twice at this photo… That is a Victorinox tool in a Leatherman pouch. It is the original, now unfortunetally discontinued leather sheath for the first Leatherman Waves. It never did fit the 2nd gen Wave I have worth a darn, but it fits the Spirit like a tailor made glove!  (and ironically, the stock sheath that comes woth the Vic fits the 2nd  gen Wave rather well too!)

Now, the other belt sheath that I have just recently found a like for, is a Zippo sheath. But not for a Zippo.

My Zippos, for security reasons go in my jeans 5th  (watch)pocket. Its hard to lose them from there when you get into those afore mentioned tight/funny places.   I never even tried the Zippo in its sheath for the reasons in the first paragraph of this post, and because these Zippo sheaths don’t have a fixed belt loop…

The loop has a snap closure… Never struck me as a very secure idea.

Where I carry the Zippo makes it Extrememly ironic what I am carrying in the Zippo sheath… My pocket watch.  I’ve found that my watches all fit rather well in the sheath, are easy to draw and replace, and that snap down belt loop really is pretty secure. I think even if it came un snapped that the belt would still hold it and keep it from being lost, at least for a while.

No, I won’t be reversing the irony and putting the lighter in the sheath, and the watch in the pocket… If it ain’t broke don’t fix it; Meaning carrying the lighter there is habbit, and a standard that I have had for a decade. Its what I’m used to, and its what works.

This sheath carry also doesn’t have a lot of the problems that I’ve had with other before, because of how compact it is, and Where I am putting it. I am carrying this in the front, between 12 and 1 o’clock on my belt(between my pants fly and my right front pocket). Verry seldom, if Ever do ya end up laying on your front when working, or moving in tight spaces… I don’t anyway. At least anywhere that I have pants on 😉

Here with one of my older full cased watches, the one I’ve been carrying off and on for the past few weeks;

(have had this watch for forever, and its held up fabulously in loose pocket carry for a relatively cheap quartz watch. Dad bought it for me when I was about 10 or 11. Actually think it might have been my first watch, I can’t remember having a wrist watch before then) 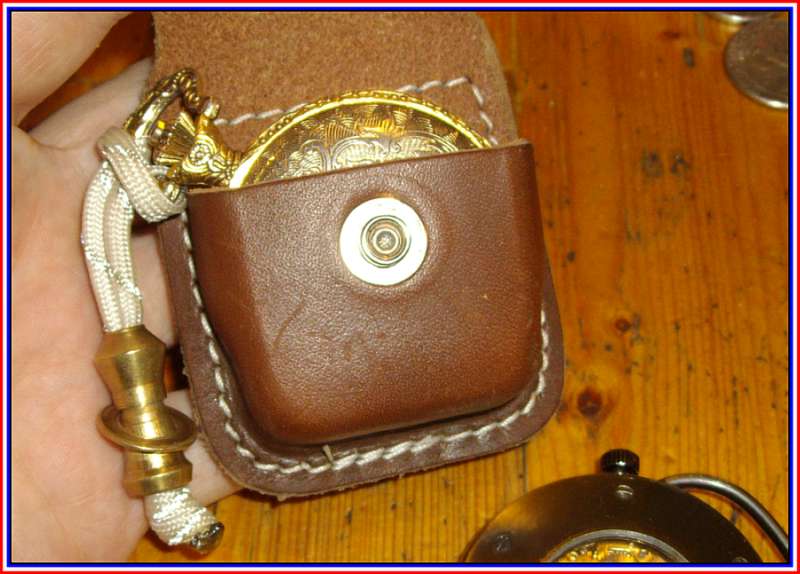 And with the new one that came today; 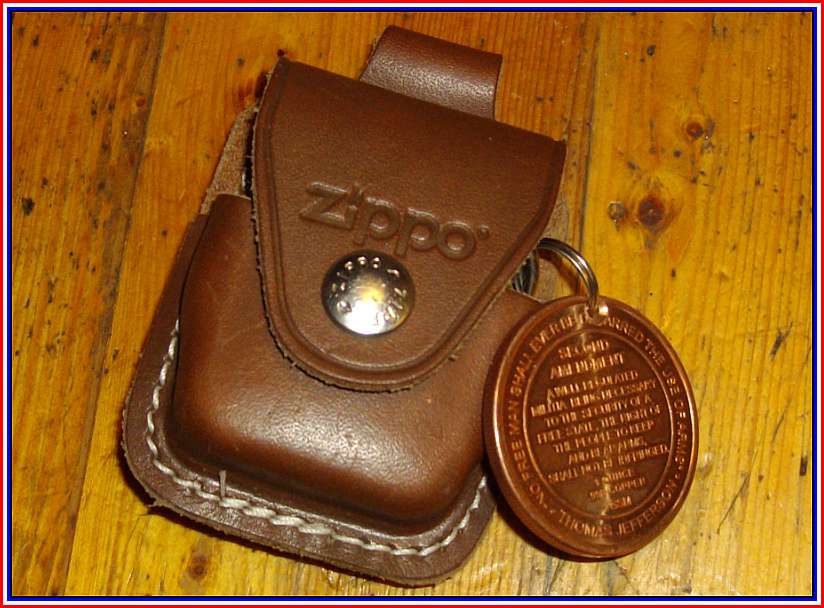 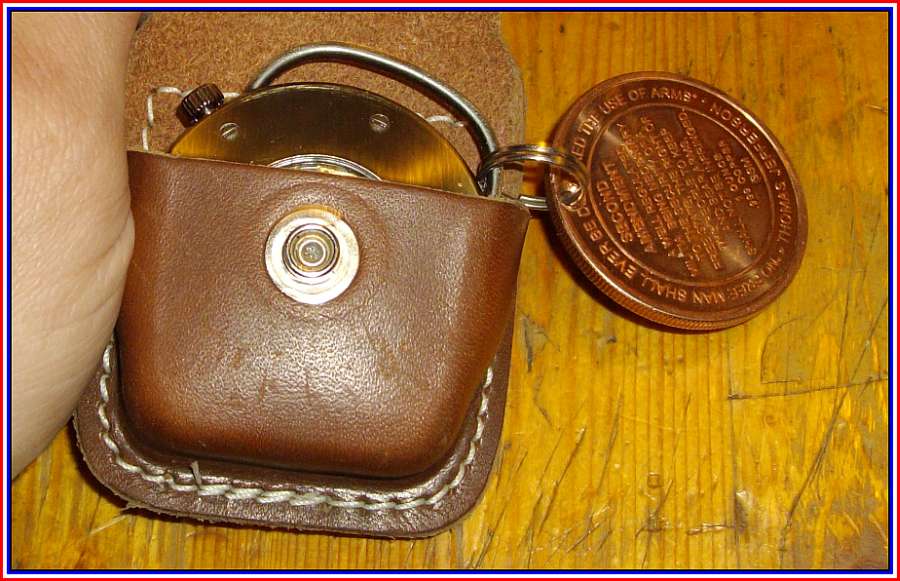 One thought on “Of likes, and dislikes, and belt sheaths.”