Some comparisons of my two largest working knives, the Manifold I’ve had and been using for hard use/rough work days since late last July. The Thermite I just received, and will be serving in the same role.

This role, is the knife I take on days where I’m pretty sure my knife use will be more on the side of chisseling and scraping than cutting, or where any use will be in extremely dirty, muddy, greasy etc places…    For a long time, and still a lot of the time ,y combo edge Cryo filled this role, and filled it marvelously. Then last year i got the Manifold out of curriosity for a larger folder, and since I was working a verry muddy, dirty construction job the week it came, it got put into this role instantly, worked great, and has generally stayed the knife I use for this stuff.

Not that I ever really hesitate to use Any of my knives for these things, but if I know at the days start, if I’m 95% sure that this kinda thing will come up, I prefer to take a rougher knife… This kinda thing can be hard/abusive on smaller less robust, or more precison or closed action knives; For instance, slipjoints like the Queen stockman I have been carrying lately.

Now, though, I will swap to the Thermite, since it solves some issues I had with the Manifold.

The biggest being it is drolled and tapped for 4 way clip attachment, so I can actually carry it in a left hand, tip up( common carry designations; dirrection tip of blade points when its in the pocket, folded; tip up or tip down..) configuration.

For general use like, or orientation when i draw and open the knife this doesn’t matter to me, but what it gains me is the lanyard hole on the knife being UP, so it can be used.

I Need fobs/pulls on my knives and lights. It makes getting them out of my pockets with work or winter gloves on 100% easier… The manifold has been a pain, since it is only drilled for tip down… so the lanyard hole, and anything attached to it is at the bottom of your pocket. I’d like to talk to the idiot at Kershaw that did that design brilliance!

And, the Thermite has a lighter G10 front scale, where the Manifold is metal through and through… Lighter to carry.

Otherwise, they are Verry similar knives, both the same basic blade and handle pattern, both with the thunm ramped blade, and sweeping finger notches in the grip area. Both the most comfortable knives I think I have ever held! 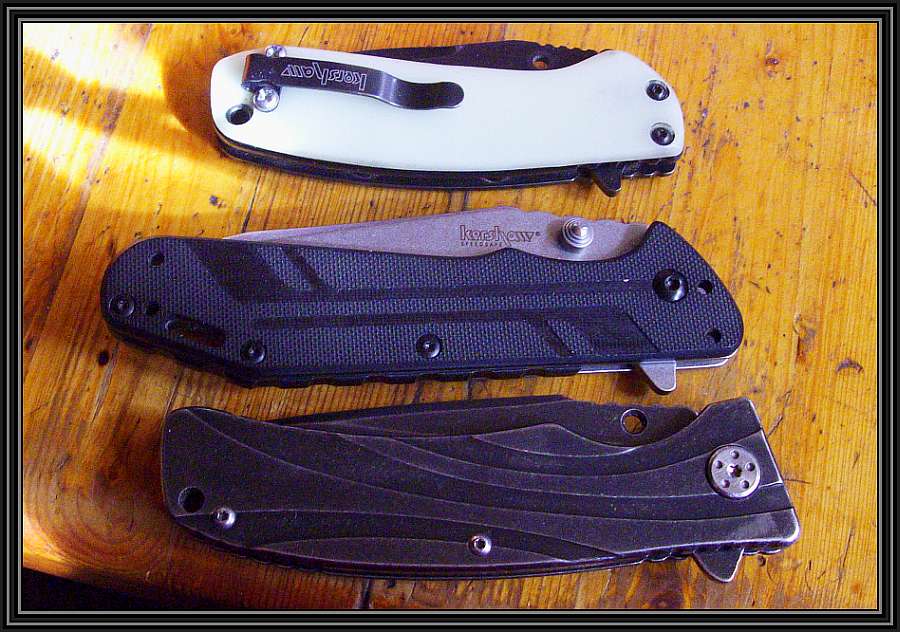 A lot of you will get a kick out of this, if you remember that I Hate sheaths and stuff on my belt…

I’ve taken to carrying the Manifold dirrectly clipped to my belt lately, and that has worked great; No bulky sheath on my belt, its slim and low profile, and at the same time gets the bulk and weight out of my pocket.

I carry it about half way between 3 and 4 o’clock on my left side. With the right hand tip down clip position, this puts the blade forward, and the flipper back away from getting bumped and opening the thing. I was EXTREMELY careful the first day i carried like this, knowing how epically dangerous that knife coming open in that place could be. So far its stayed closed securely all the time.

I had hoped to carry the Thermite the same way, but the smaller clip design might be a tad unsecure for belt carry. I’d like the clip to be longer than the width of my belt, so it “clips past” when fully seated…

Thus, I was hoping that the clip hole spacing would be the same, so I could use the large clip off of my Starter(same clip as is on the Manifold) on the Thermite, but they went with the hole spacing and clip from the Cryo, which is a smaller setup..

Will try it as is though and see how it goes.. 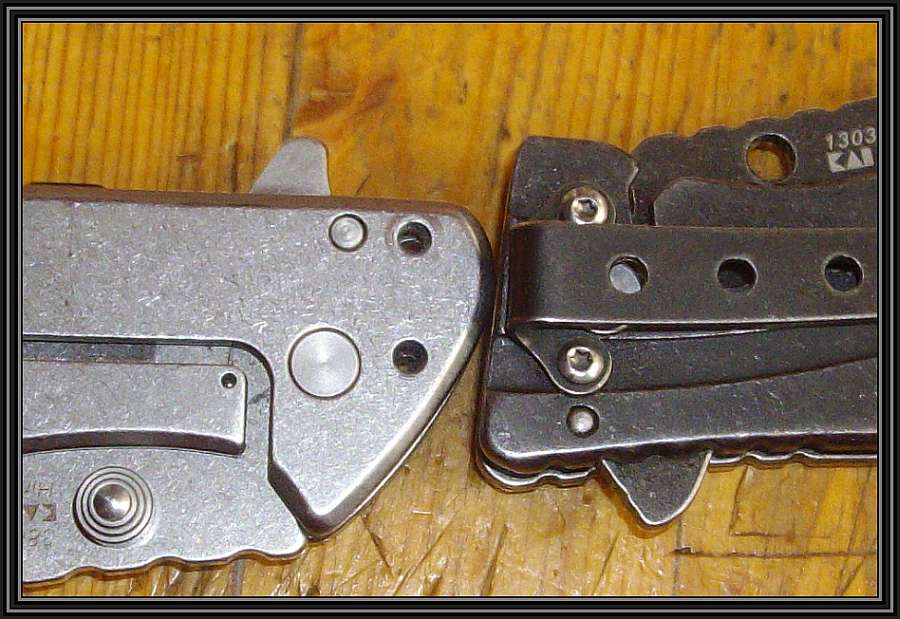 One thought on “Manifold Vs. Thermite”