Started out to be a Loooonnnngggg day plowing… We got a Good 6” of snow form approx. Friday afternoon till Saturday afternoon.. Add in the 2″ or 3″ we got Thursday night, and the 1″ ish left from the 2″ we got Tuesday that Weds rain melted.. And some places had a substantial amount to plow.

(Most guys try to plow every 4″ to 6″… It doesn’t sound like a lot, but making a 6′ wide pass through that for anywhere from 50′ to 1/4 mile at a time can be a LOT of snow to push around, especially where the roads take 3 to 4 of those passes, or a drive way/parking area can take a lot more… 😉 4″ of snow over an acre of clearings and a mile of road is a pretty good amount of snow to move)

Lots went on, plowing, and fixing, and improvising… And taking 4 hours to get a truck un-stuck(more on that later). 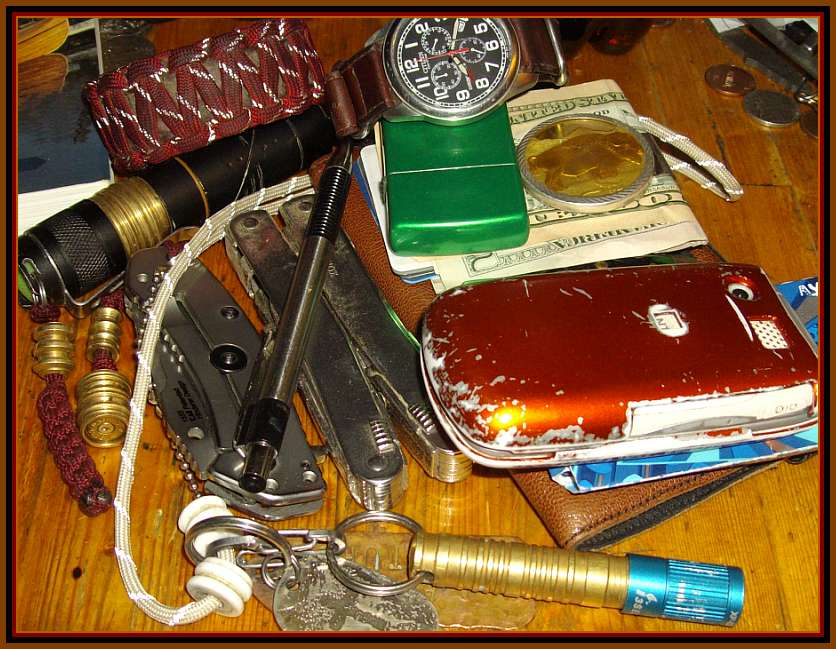 Also had my grey rubber bit/ratchet kit, the Knipex pliers wrench, my Browning headlamp, my current Macgyver/repair kit, emergency eating kit, two sets of truck keys, my water bottle, the camera, a mp3 player and its portable battery speaker unit… Two pairs of gloves(or one pair… the pair I wear I don’t count as edc, its a given item… But both pair were carried as spare too; I alternate depending on what I’m doing, or sometimes layer them)

Could swear there was something else but I’m drawing a blank on what it was…  I carted that Husky shovel around a lot today, but thats not what I’m thinking… am thinking I’m forgetting a pocketed item. Ahh Well.