Posted on November 6, 2014 by akadventurer

Mounting the barrel was dead simple really, took me all of maybe a half hour….

The real chore was an ejector housing. That took about 5.5 hours…  See, several years ago I got into short barreled SA revolvers(they just point, shoot, and look great with about 3.5” of barrel!) So I cut this sucker down shorter then… In the process, I had to shorten and re mount the ejector housing. Which I screwd up. Cut it too short, and made the ejector too short to actually eject a fired case.  I’ve had this thing for about 8 years without being able to easily shoot it becasue un loading was such a PITA…

Never thought I could machine a new ejector housing….  But last night it seemed within my reach, and I thought I knew how I’d do it.  ANA amazingly, it worked!!

The original screwed up housing, and a chunk on 1/2” aluminum stock.

Turned the end to fit the frame; 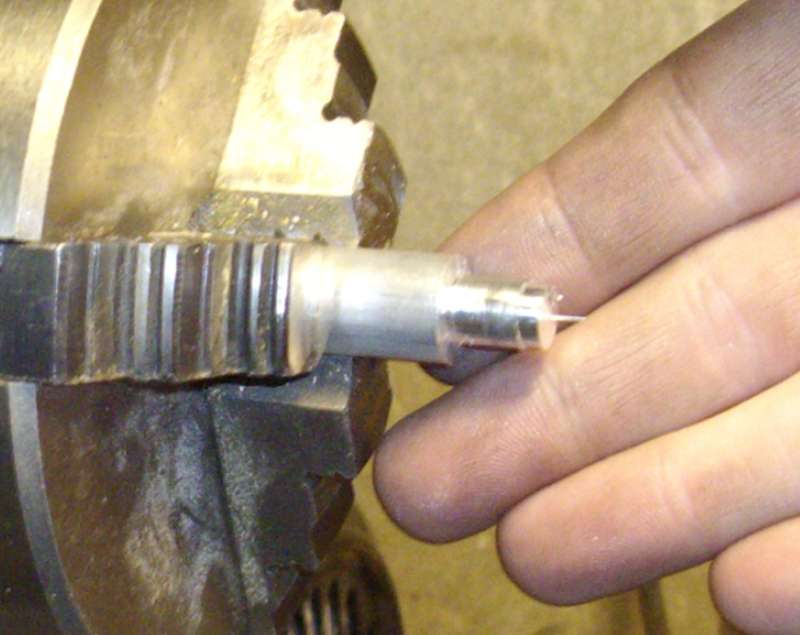 YOu can just barely see there where I got currious how small I could turn a section of the end when trimming for length…. Pretty darn small!!

Then also center drilled the frame end one sie to fit a ejector rod of good size, then the onther end a bit bigger(simply to be able to use a long enough bit that would go all the way through…. any longer in the first end was too big and would have ate the reduced end that goes into the frame… I need to get some smaller bits in Longer lengths! )

Next was cutting the barrel channel down one side… I started to do it freehand on the grinder much the same way I did the bottom of a sclope rail a while back… but it was slow and extremely tedious. SO I found a better way. Made the lathe into a milling machine for a little while.  Needed a curved bit though, and not having a ball ended end mill that big(biggest one I have is about 1/8”!) I decided to try a round nose router bit. They are designed for wood, and only tow cutter instead of the usual 4 for milling cutters, but they are carbide cutters, and aluminum is rather soft… I took the chance.

Once again I got lucky… any bigger stock dia, and this wouldn’t have worked. I used the tool post/cutter holder as a fast easy vise. I had to space the stock all the way to the top of the gap to get the cutter on center…. The post opening, nor the post itself are adjustable for height… If the stock had been any bigger it never would have fit at the right height. 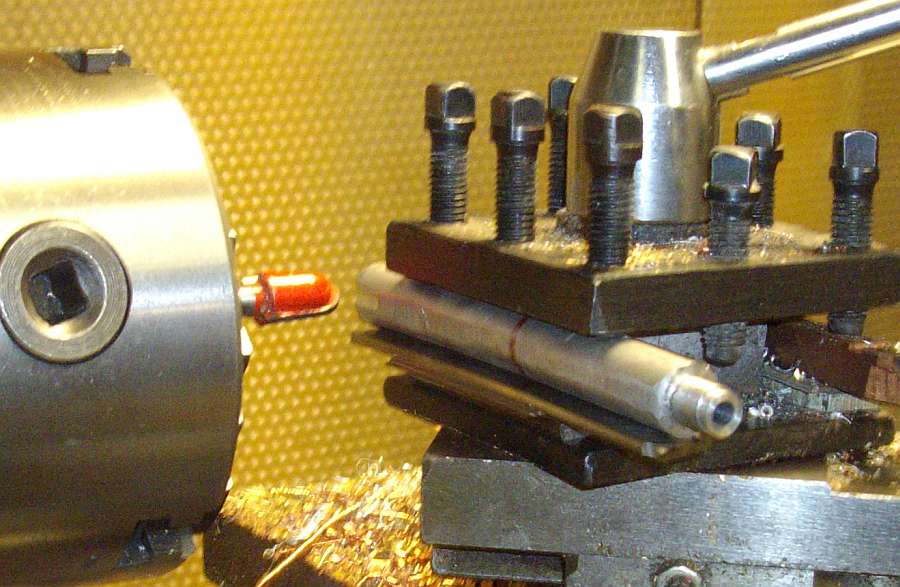 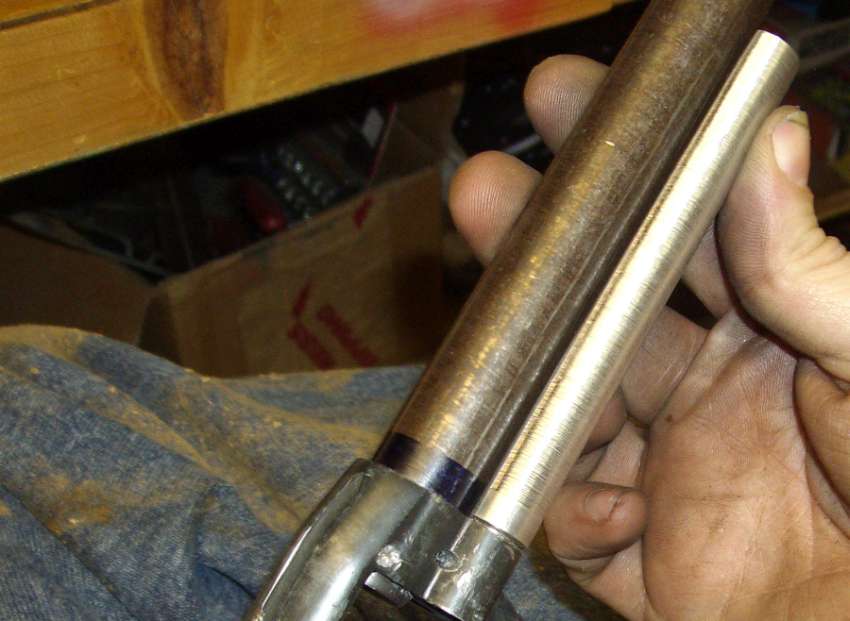 Then with it clamped to the barrel, I messed up again… I had it held in place to dripp the mounting hole, through the housing and into the barrel to tap for the mount screw… I used a brand new HSS bit. Bad idea. It cut great… didn’t wonder. Stayed right where I wanted to drill.  AND was so sharp I could’t tell the difference from cutting aluminum to cutting steel, and drilled too deep. Right into the bore or the barrel.

SO I might have just ruined the barrel, depending on how it shoots with a hole in the side 5” up from the end… 😉   Not a really big deal if it does shoot terribly; two points; I can’t get any ammo for this thing anyway, and I have enough barrelleft to cut it down to a normal 6” hand gun length, and still use the new ejector housing as is, having a fully working handgun again.

Knowing I could do that, I went ahead and finished the ejector setup. 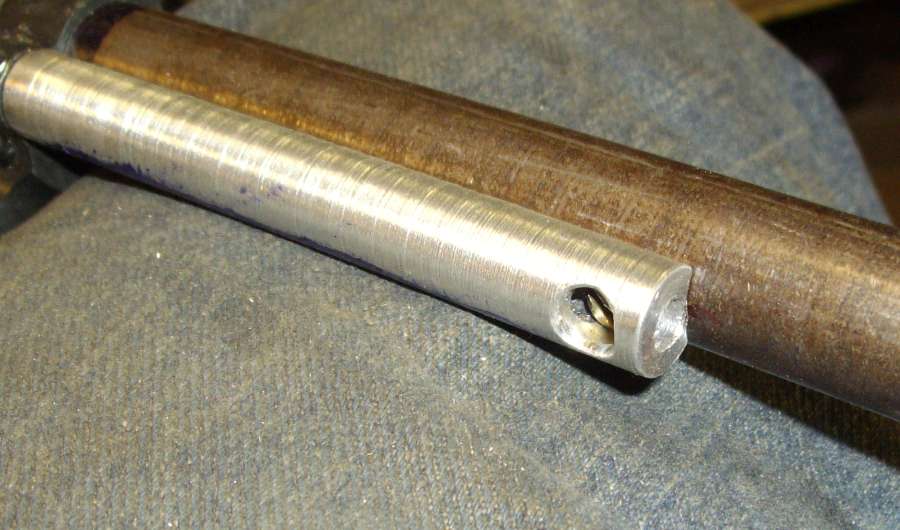 Next was machining the slot for the ejector to ride in, so back to the improvised mill, this time with a real milling cutter; 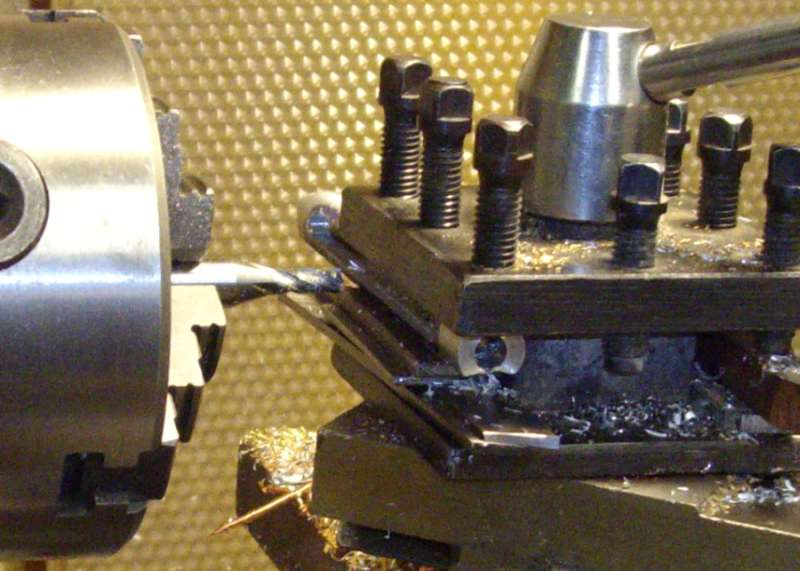 Next up will be to cut down the handle tip on the ejector rod, thread it and make/thread one of my vrass beads to go onto it for a handle. And I need to scrounge a spring for it too, plus re-smooth and polish the outside of the housing as best as I can, before getting some aluma black to color it off.

This was a great project for me, the first time I have tried to, let alone succeeded at machining a non 100% round, 3D object… The most complex machine work I’ve ever done!  Learned a lot about how to do things, and also boosted my confidence learning that I CAN do it!

As to the carbine… well, we’ll see. I can always get another cheap .22 barrel blank later and do it again… Like I said, mounting the barrel itself was simple.