Posted on November 1, 2014 by akadventurer

So, after my last post about the Altoids tin being too short, one friend requested that I finish the welding on my shortened truck bed project before tacking sectioning and wemding up a longer Altoids tin… Thats funny, but even more so if you know that that was my first though about 15 seconds after realizing the tin was too short…  “I wonder if I can cut up two and weld one back together longer….”
Serriously, thats exactly what I thought.

You guys are getting to know me too well!

the Leatherman bit drive extension fit in the tin fine;

Just had to decide which ratchet to cut down…. If I ruined one it wouldn’t be much loss, I don’t carry either anymore anyway since I got the TengTools ratchet and bits from a friend in Norway…  but I didn’t want to lose the end driver function of either of them..  The Victorinox ratchet was less loss, since to reverse its drive you have to flip it over, and bits tend to push straight through it if you bear down on them… But both of those points are also applicable to Not wanting it in the tin to carry! The Topeak ratchet would be the good choice, since it has a reversing lever, and a stop collar that doesn’t let the bits all the way through…

But to cut off the Rocket ratchet short enough looses the end driver…. A minor to medium loss for actual driving, but  Huge of being able to put the extension on the end for handle leverage!

I decided to cut the Teng Tools Ratchet… Its the slimmest, shortest, and already didn’t have a end that could be extended for leverage… In the year I’ve had that sucker, I have NEVER needed the 8mm socket on its back end… Heck, I can’t remember the last time I needed a 8mm driver at all!

Cutting it off was easy… Drilling it for a hole to still be able to keychain carry it later was another story altogether… It at a HSS drill bit, a diamond grit dremel burr, and started to round off the end of my solid carbide burr!! Core of ths sucker is HARD! I’ll finish that later after I can aneal it a bit softer on the end.

The  bit holder is the edge cut off of a larger one for one of my previous kits… Had no reason to keep it at the time, but thought it might come in handy if I ever needed super slim bit storage… I was right! Just had to cut one space off the end for it to fit.

I then ground the 1/4” hex angles onto the handle end of the ratchet. Like on the flat 1’8” thick leatherman bits, as long as the width and angles are the same as a 1/4” bit, it doesn’t need to be full thickness, it still engages the driver perfectly…. Now has a handle extension!

Cut down a Leather man bit holder card to fit;

It does if I do away with the red bit rail and drop those bits in loose.  This actually packs great!  I had avoided loose bit holders in the past since its easy to spill them while working, but this tin is so low, flat, and stable, I thinink it will be OK. Its also wide mouthed and flat enough to be only about one layer deep of bits, so getting out what I want without having to purposefully dump it to find a bit should be easy too.

In this configuration, as tight as the tin closes, I can drop it from 2′ to 2.5′ feet onto a concrete floor without it popping open! From 3′ it starts to pop open 90% of the time.. Also dents the tin edges pretty good…. 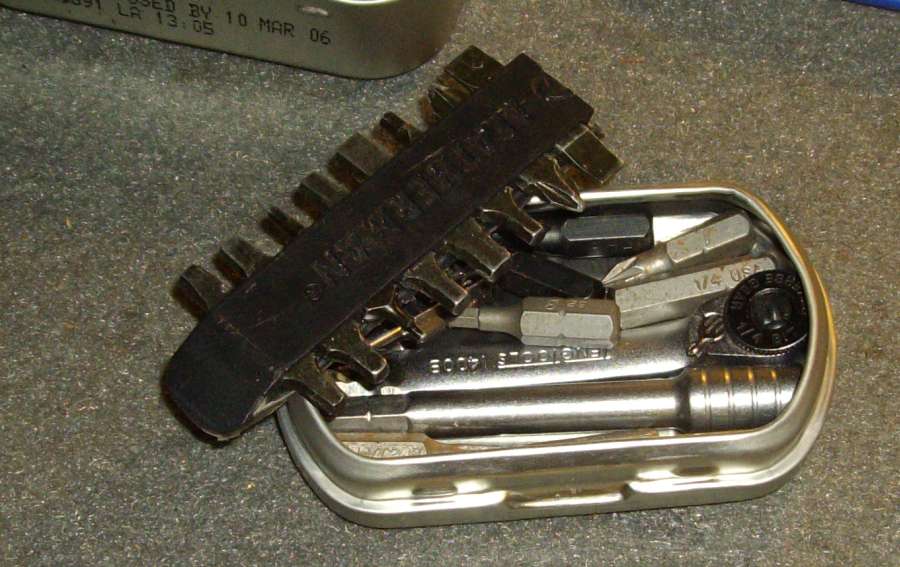 I can even add in my micro 4xx bit driver adaptor, and have room for several of its double ended bits… running the kits capability down to T4, or 00 phillips!

Now I just need to evaluate what EXACT bits I actually use regularly, and what ones I use rarely but often enough to carry just in case. Same with some small sockets.