Todays carry and knife use

Was talking to a friend about knives, and cost of some, high end production and custom pieces, specifically one that is a $300 to $400 purchase on average…  And our problems with being able to carry and things that are spendy…  Slight modification of what I said to him follows(modified for quotes, references etc, to keep from having to copy the whole conversation to here..)

I am a user first and foremost, not a collector, and I try my best to ignore cost, and sentimental value of items when it comes to use. If I stop using something it bugs me. Things are made to be used, not lay around. But, at a certain point, it gets hard to do that, for me mostly like he said bothers him; for fear of loss.

Right now, for financial reasons I could never justify $300+ for a knife. I am having a hard enough time with $30, and really wanting a Zero Tolerance 0566 is killing me at its ~$125. But even if I had the money free and clear, I couldn’t do it at $300. My priorities and desires have changed.

I do have one knife that was $300. I had no problem then committing the money to it, both financially, and conceptually… But now I doubt I could do it, even if I had the money to burn. Same for my custom Reeves hatchet that was $200. They are both worth it, no doubt, both superb quality, and I still have a great appreciation for quality of build, craftsmanship etc… I’ve just lost my personal desire to own and use that kind of craftsmanship in everything I do, like I did once.

Also, there is no practical applicable gain in my opinion… Not that everything has to be practical to me now… far from it! But still, that $300 piece doesn’t cut any different than my $20 Kershaws do…. Not for what I do and how I do it. The steel is no doubt better in the higher cost/quality knife, for some use, extended use etc… But I almost never notice the difference.

And, on that note, I think I’ll go get out that $300 knife and carry/use/abuse it today, to continue reminding myself its just another knife that deserves to be treated as such…

So anyway, todays EDC including that knife, and a proof of use pic(even if it is a simple fun use, shows its not a pristine shelf queen knife like some people keep) 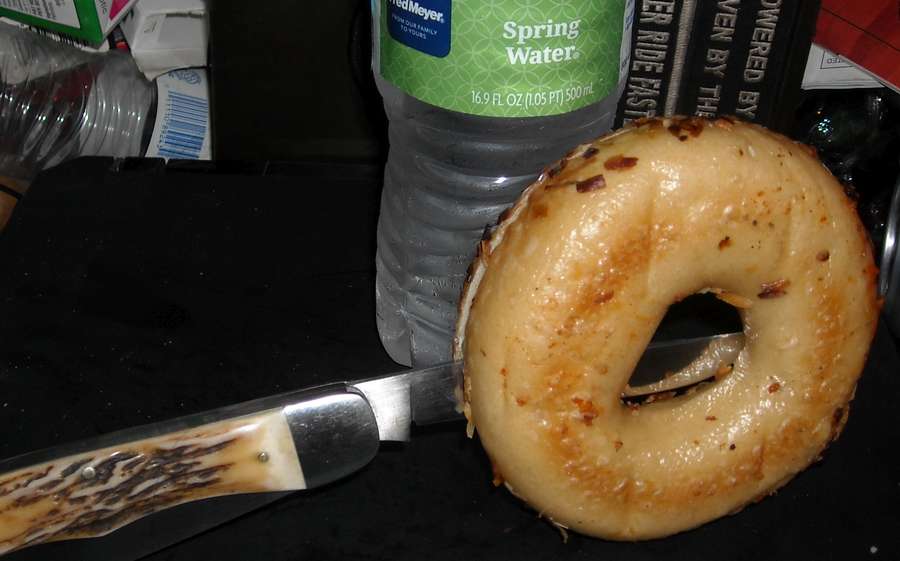 For those interested, the knife is a Amherst Cutlery large folding hunter, its deer stag handles, over a 420 SS frame, and 154CM high end stainless blades. It is a hand built 1 of 6 limited prototype piece.   They never did go to production either, the 6 prototypes were all that was made of this design The company folded because of shoddy business practices less than a year later… Top notch knife though, was a steal for the $300 I paid 8 years ago. The same materials, build and limited production would cost twice that or more now..

Not that I’m trying to brag on it.. I simply enjoy it for what it is, and as I said, try to ignore its cost.

One thought on “Todays carry and knife use”