So, as you will see, I started out with the scale openings for the bit storage holders laid out/templated, to be cut out… But doing so would have removed SO much real estate from the color swirl and shift in the material. I had planned to do just of side without the opening, figured 3 double ended bits would be fine for general carry… I chickened out on doing that much precise routing of the scales. Maybe I’ll add it in later. The knife will still be very handy just having the driver on it for the bit kit I carry anyway, and even without that, it still has the two most used drivers in the one double ended bit.

This knife has a great construction, take the outer scales off, and the knife is still together, and would function as a frame lock wonderfully. Its held together with 3 screws separate from the 4 screws that hold the scales on.   Made it great to fit scales to, total assembly wasn’t needed for each and every small fitment.  I could have used the scales loose for final fitting, but along the way, fitting the pockets for the screws, and the screw driver spring would have been impossible with it fully apart. 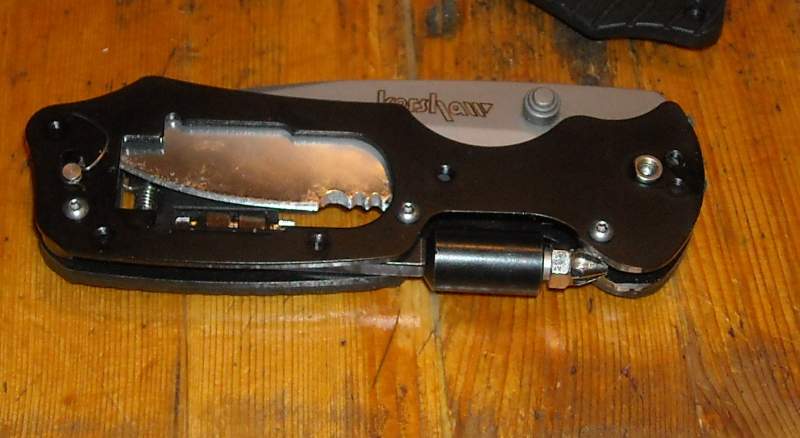 Scale has three pocket holes in the back for the frame screws, and a large recess that clears the pin and spring that tensions the screw drivers half stop and open notches.

General layout, clip and attachment holes drilled and screws set in place, done one at a time, screws added as I went for alignment, more precise the further I went, with each additional screw set in place.

I drilled the rear 3 pockets holes through to provide a location template to make the pockets in the new scales.

Routed out the spring clearance pocket, slowly with a lot of test fitting(dremel and a 1/8” carbide carving burr)

Then spit the block up the middle, making both scales, with aligned holes.

Side one rough fit; 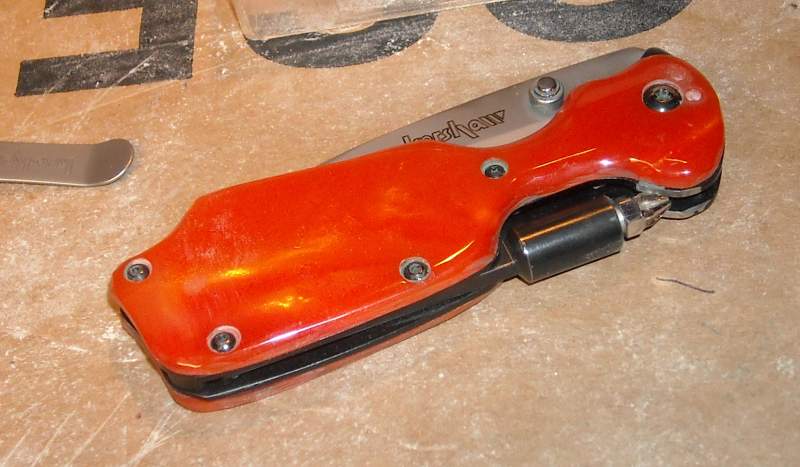 My one big mistake, got the clearance pocket in this side too close to the outer edge, and final sanding went into it. slightly. Hard to see if your not looking for it, and not deep enough to make a rough spot to grip or effect use.