I rounded off the uncomfortable bits on the pommel of my Opinel, and recoated in polyurethane.

I kinda unmodified the main blade in this Rough Rider doctors knife. When I got it was the earlier time in my life when I was experimenting with using wharncliffe blades… (later stopping, then going back again after several years)

I’d modified both pen blades in this to wharnies.

Which is almost as pointless as two pen blades… not sure why I did both. I’d also ground both to convex no secondary bevel edges, something else I was using a lot then. (This was around 2006, 2007 ish…)

I just made the main blade back into a pen, and dropped the kick to get the tip below the liners. The convex I left. Dont use that much anymore, but can’t see a problem with it either.

Finally did something with the blades in this Schmachtenberg Bros. sleeveboard I got last summer.

Squared the ragged end off the broken main, and rounded the back corner off so its not sharp to hold anymore.

Sharpened the pen blade too, and dropped its tip so its below the liners. Could have left it a higher tip, and dropped the kick, but that would have made it impossible to open without cutting a relief in the scale/liner, and I didn’t want to do that on this one, wanted the frame shape left alone.

It was the fist traditional pocket knife that I really carried a Lot and worked a Lot.  We started building our garage tgat summer and I remember the lighting fast cuts it made opening cement bags… A highly abrasive task that never seemed to phase it.

It is made by Bear MGC, Now Bear and Sons. Its a Damascus steel 4.125″ 2 blade trapper. It was built with brass liners, nickel silver bolsters, and thick swell center burnt stag bone handles.

Within a week I’d ground the stag down to smooth “normal” profile, and retoasted them a light caramel.

Within a couple years, I’d taken it apart to rehandle it in sonething else.

About 10 years later, I had gotten back to it after purchasing another like it that I did in moose stag.

At that pointvid picked out materials, etc along the way, knew what I wanted to do, had just never had the time or gumption to do it.

The saga of that build can be seen here;

I think I’ve carried it five times since I built it like that. Used less. When I did it, I left it Really thick toward the back, for a tapered fatter grip, which I thought I’d like.

It was OK to grip, but not great, and turned out horrendous to pocket.

The best couple pics at the end of the above posts, that show what I ended up not liking,  are these I think. 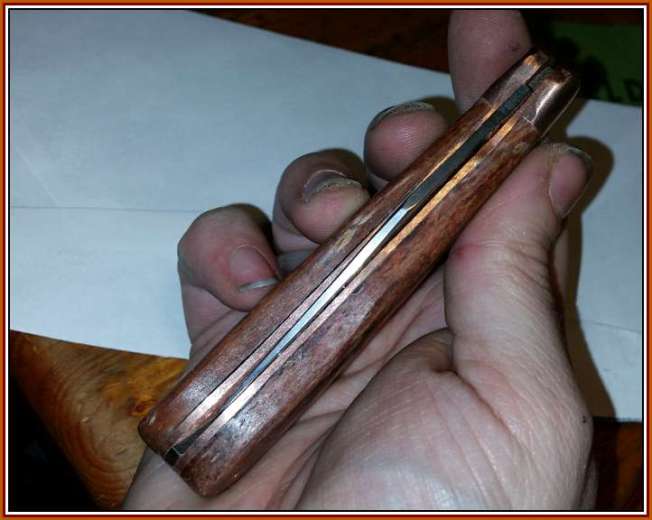 Aaaannnnddd… where I started this time;

I carefully sawed slots in the “pins”(corby bolts!), cranked them apart, and took the sucker apart. Thankfully I had a hatred for glueing knife scales on, so no trouble there. 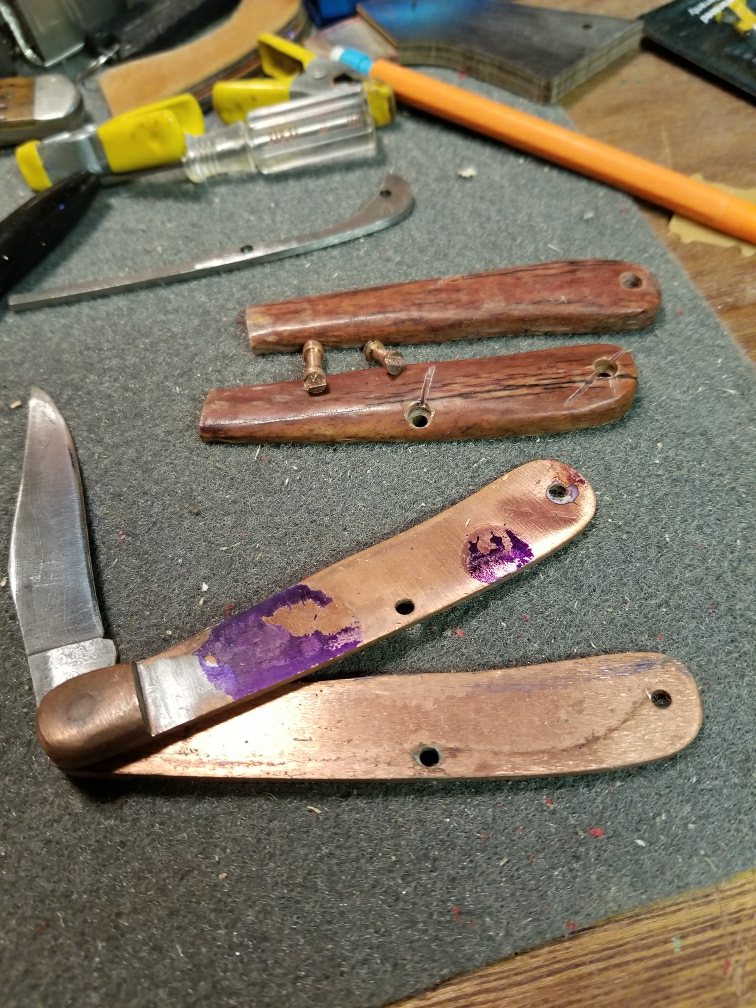 Cut and filed the uneven bolsters the same length(damn close)

Looks like I missed pics of cutting, stacking, and installing the fiber spacers. That was tedious but i got them a tight fit.

During, attached together to match the profile, thicknesses easier, blue tape the super glue that together.

Got into some porosity… semi super glue filled after I was done.

Top bolt was the same as the lower when I started, had to lathe them so the shanks were longer. Half this hardware was in the knife when I took it apart. The other half was pirces Id screwed up the first time around that I had to mod/fix.

Made a short brass spacer from a loveless bolt set even shorter for a corby bolt I had that wasn’t long enough to reach through the second liner… spacer is threaded so when its all cranked together its the same support and grip as the corby shaft being longer..

Assembled and had actually sanded the scales too short from the spacers(freaking fine sanding to fit the angles) so I came up with a secret weapon, and filled the gaps.. color even works ok with these scales.

We’ll see how durable it turns out to be.

Assembled and ground the corbys off, still no epoxy in it in case I want to have it apart again someday. (Not likely!!!)

Finish sanded and thinned it some more, hand sanded everything @220, and buffed lightly…

Need a clean buffing wheel, will set that up and buff the bolsters to high gloss… someday. 😉

But for now, she’s done again! Its a lot cleaner of a build now, and friendlier in hand and pocket.

I like it a lot better!! Its a much better grip, still thicker than a single blade trapper would be, it feels like a slightly thick two blade folder, or a thin fixed blade. And it basically disappears in pocket too.

Maybe after about 15 years,  I might get to carry it again. 🙂

Posted on February 9, 2021 by akadventurer
A couple hours project from last weekend.

What I’ve been using a few years(not that I’ve carried it much for a bit over a year, using metal card cases instead);

That blue thread is my favorite braided 20# ice fishing line. Great to sew with, strong, blends in on most things, but a nice(I think) contrast on others.

Don’t use cash much anymore with Covid, but I fold a few bills inside this one, its just a touch too thick to have them on the outside. Makes cash access a little slower, but as I say I don’t really use it now anyway.

So far its working out verry nicely!

If you light it, that is!

Another new lighter that I’ve had a few weeks now. Been wanting one of these for a while, the 1935 replica Zippo.

Finish on it is like a polished brushed chrome… it has the brushed pattern on it, but it is super smooth and shiny in some light. A real Pain to photograph.

You can easily see the difference, they are much less rounded, boxier than the newer style. Also slightly shorter. (The current modern style dates from the mid 1940s, with a couple other variations between it and the 1935.)

They have their own insert to fit the squared corners, but a standard modern insert, even a pipe insert does fit. Might be a bit more fuel evaporation since its not snug in the case corners though.

And the modern insert in the 35 case;

Here is the 35 insert, where it’s corners are too big to go into the modern case;

Unfortunately with the case being not as tall in the lid, the new butane and electric arc insert won’t work. They go into the bottom case, but the lid won’t clear them to close.

Not really a big deal, if you’re into the retro style, then odds are your after a oil lighter style flame anyway, not the modern ones. I’d just thought it would be groovy to have an arc insert in sometimes– but I have an odd mix of tastes! 😉

One more new light. This was purchased on a whim, it popped up in the checkout area of napa’s website. For $4.99, I figured why not?

Branded Evercraft. Its one mode, 120 lumens. Runs on 3xaaa, which it came with. Given the cost of alkaline batts these days, I think I paid about $1.50 for the light! Lol.

Its all plastic, verry lightweight.

I expected the butt end of it to be magnetic like I’ve seen on these bar lights before, so I’m a little disappointed. But it does have a magnet on the clip, and the clip rotates/swings on the light for aiming it, which is kinda nice. Will see how it works in use.

With Jetbeam BC10 for scale.

Might actually grab a couple more of these things to throw in glove boxes or tool boxes for cheap backup/ emergency work lights. Looks like they’re $10.99 normally, they’re $6 off this month. Even @ $11, I think I’d get at least one, can’t see anything wrong with it.

I picked this as a donor to cut up for a new mod/custom project(details on that soon!), trying not to have to build a light/driver from scratch.

But after I ordered it I realized that its cased in solid aluminum! And would be a real bitch to take apart without hurting the innards.

On top of which, I really started to like the idea of keeping it as is.

Its just arrived, and I must say I won’t be able cannibalize it for parts, I Really do like it!

When they say small, they mean it! I bought it mainly on its external dimensions so I knew where I could fit the parts, but even then I was surprised how small it is!

Absolutely amazes me that on high this thing is only 40 lumens shy of the BC10 on high!

Full specs, details of operation etc, coming soon when I do a review after I can get in a few days of carry and use.